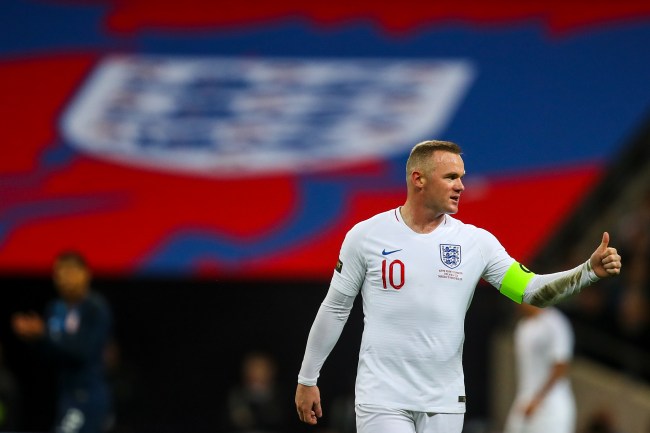 Wayne Rooney is one of the most famous British soccer players in the history of the game. He’s Manchester United’s all-time leading goal scorer. He also holds that record with the England national team (Three Lions).

Rooney played his 2018 season in the MLS with D.C. United where he scored 12 goals in 20 games, he also made his final appearance with the England national team. He’s been a welcome sight at the pubs across Washington D.C. where Rooney can often slip away in plain sight because he’s not nearly as recognized by Americans as he is anywhere abroad.

Back in 2017, Wayne Rooney was convicted of drunk driving in England. He was forced to pay a small fine, complete 100-hours of community service, and he was banned from driving (in England?) for two years. Less than a year later, Rooney’s drinking has him back in the news after it was revealed that he was arrested last month for ‘public intoxication and swearing’ at Dulles Airport in D.C.

A spokesperson for Rooney said that he was ‘disorientated’ after taking sleeping pills and drinking alcohol during a long flight from Saudi Arabia. The Daily Mail reports:

The 33-year-old former England captain – currently playing for Major League Soccer side DC United in Washington – was held after triggering a door alarm after touching down at the city’s Dulles airport on a flight from Saudi Arabia.

Police approached him when he seemed intoxicated after leaving the plane – before arresting him, taking his mugshot and throwing him in the cells ‘until he sobered up’ on December 16.

Rooney, who is still banned from getting behind the wheel in Britain after being caught drink-driving, set off the alarm but did not breach airport security, according to the Metropolitan Washington Airports Authority Police.

A spokesman said: ‘Mr Rooney was charged with public intoxication and transported to Loudoun County Detention Centre to be held until sober.’ (via)

Court proceedings were dropped when Rooney paid his small fine ($25) a few days ago.

Here is a statement from the spokesperson of Wayne Rooney…after the DC United star was arrested for public intoxication at Dulles Airport on 12/16/18 pic.twitter.com/uE0MK7FhAI

How does a person get arrested for ‘swearing’? Here’s the explanation via Twitter:

For those asking about the swearing stuff: pic.twitter.com/NECvgJCpaW

This is a legit concern of mine everytime I get on an overnight flight. I was in Barcelona for the past two weeks and took some sleeping pills on the flight over. You hear these stories of people doing the craziest shit on sleeping aids and I’m always worried that I’m somehow going to snap into consciousness butt-naked in the middle of the flight or wake up in handcuffs because I tried to fall asleep in the first class cabin after sleepwalking.

All things considered, this went well for Wayne Rooney. He got a small fine. His personal image took a hit in worldwide news but most fans won’t care. Breaking the law on a flight and/or in an airport typically carries more severe penalties. A $25 fine is nothing.

For more on this story you can click here to visit the Daily Mail.