Wayne Rooney Claims ‘Set Up’ After Leaks Show Him Allegedly Being Farted On, Partying With 21 Year Olds 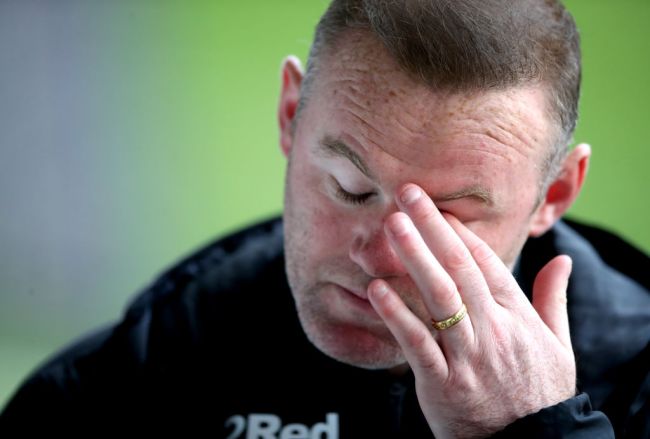 Wayne Rooney is married with four kids and insists that he was not cheating over the weekend. Rooney, 35, was the subject of an aspiring social media model’s selfies on Saturday night and believes that he was “set up.”

Saturday marked the first weekend that nightclubs in England were allowed to open in more than 15 months due to COVID-19 restrictions and Rooney appeared to take full advantage. He and three 21-year-old women reportedly partied into the early hours of Sunday.

Identified as Tayler Ryan, Elise Melvin and Brooke Morgan, the trio went out in Manchester to celebrate a friend’s 21st birthday at the exclusive Chinawhite club. After a few hours, they were invited over to Rooney’s VIP booth.

The former England striker was allegedly photographed speaking to (or kissing?) a blonde woman at the club. It is unclear whether it is one of the three.

This Wayne Rooney guy gets caught cheating after every 4 years. Still a legend but his playing the wrong World Cup. pic.twitter.com/sKXU5T8bJe

A moon and a Roon.

When the night was over, Rooney and two of his friends followed the girls back to their €60-a-night hotel room to keep the party going. Photos began to surface at that point.

One picture showed the bleary-eyed Rooney waving his arm in the air while holding a glass of wine. Not long thereafter, he fell asleep.

The three girls decided to start playing pranks after Rooney slumped. It is unclear what happened to Rooney’s friends, but they either left or were not stopping the girls.

One photo shows Rooney asleep with one of the girls on the bed next to him in lingerie. However, the girls took it one step further and another shows one of them bearing her bum in a G-string next to Rooney’s head. The caption reads “Mooney Rooney.”

Footage also circulated on social media that showed the girl strut over to Rooney before bending over his face and unleashing a grotesque fart. It is unclear if the video is real and, honestly, it’s pretty hard to believe.

In addition to the images and video, an alleged direct message was also leaked. The message shows what is apparently one of the girls asking a ransom for the photos not to be leaked. It is also unclear if the DMs are real.

Regardless of whether the girls planned for the night to go viral or not, they did. It’s not a good look for Rooney, but a friend of the trio reportedly said that “nothing happened,” meaning that the Derby County gaffer did not engage the women sexually.

Rooney’s representatives said that they spoke with police after the photos and videos began to circulate, claiming that the embarrassing photos had been taking without his knowledge when he was asleep.

As you can see from the photos, that is true. What may not be true is whether the incident was reported to police.

Greater Manchester Police are reported not to be investigating. Not because there is nothing to investigate, but because no report has been filed.

The Daily Mail said that, “It’s not a police matter, they have struggled to find any such report to the force. At this time there is no police involvement at all.”

No matter what has or has not been reported, Derby County bosses released the following statement:

“Wayne Rooney informed the club yesterday that the pictures had emerged and that they had been taken without his knowledge or approval. After taking counsel the matter was reported to Greater Manchester Police who are currently investigating the incident. While that remains the case, there will be no further comment.”

As for the girls, one of their mothers said that they were “horrified” when the night started to go viral.