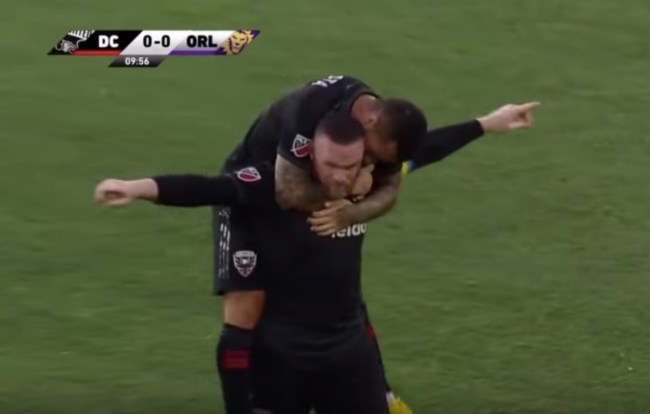 Wayne Rooney is not old. He might look a little old but that’s just appearances. He’s only 33-years-old and turning 34 in October.

However, in the world of professional sports, Wayne Rooney is an old ass man. Especially in soccer where the pros typically peak in their early to mid-20s when their vitality is at an all-time high.

Rooney was one of the most prolific goal scorers in Premier League history. He put 15 goals in the back of the net for Everton (in 67 games) and then he ascended to LEGENDARY status at Manchester United where he scored 183 goals in 393 games. He also scored an additional 53 goals for England’s National Team.

These days he’s showcasing his talents in the MLS where the quality of play is noticeably lower than in England’s Premier League. It’s unclear if that discrepancy in talent factored into this goal from Rooney last night that helped him propel D.C. United to a 1-0 victory over Orlando City or if he just unleashed some of that old Rooney magic.

Rooney sent the ball flying around 70-yards, from beyond midfield, and scored a goal by soaring it over the keeper’s head who was out of position and tried in vain to make a stop. It’s one of the most spectacular goals I’ve ever seen and fans were losing their SHIT last night after this clip hit the Internet.

Wayne Rooney is the Toby Keith of the #MLS. He ain’t as good as he once was, but he’s as good once as he ever was. pic.twitter.com/TVxlhXNnVj

As you can imagine, fans lost their bananas. From America to England, everyone on Twitter was in awe by Rooney’s goal:

HOLY CRAP. WAYNE ROONEY WITH A WOLF BLITZER OF A STRIKE FROM INSIDE HIS OWN HALF 🙌🇺🇸 pic.twitter.com/p5BkfnIQXo

Something about playing against Orlando City at Audi Field brings out the special in Wayne Rooney.

Wayne Rooney from the halfway line. Yet again. 🤯 pic.twitter.com/pAXuHO9pYa

Roony's a beast. I hate the press and all the bullshit of celebrity that goes on, especially with the British tabloid classic- Create a hero and lift them up, then find all their faults and rip them apart.

Roony's a freebird and I hope he doesn't give a fuck. 🙂

The Goal he scored for Everton FC against West Ham Unite from the half way line was just as good. This one is a cracker though

They have to somehow make it about United…

✅ Incredible goal
✅ By @WayneRooney
✅ From midfield
✅ For a team named United

We could have told you this was coming, @dcunited. pic.twitter.com/lOZSTJgnR5

That was the only goal scored in the game and it propelled Rooney’s team to a 1-0 win over Orlando City. DC United sits in a tie for third place in the Eastern Conference with 30 points through 18 games, just two points behind leaders Philadelphia with 32 points through 18 matches played.

It honestly feels like Rooney will be able to play in the MLS until he’s 40-years-old, him and Zlatan. I’m sure that won’t be the case but they seem to be that far ahead of the competition.