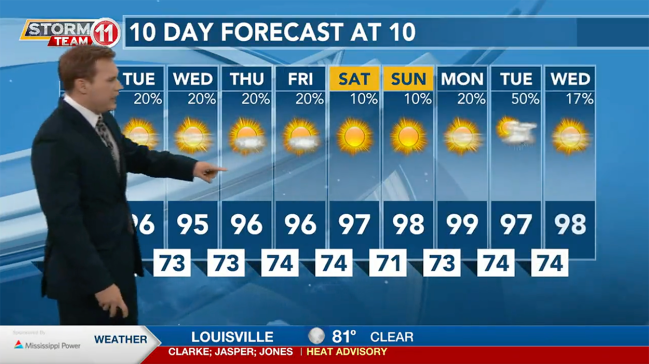 The Dallas Cowboys have not made it out of the Divisional Round of the NFL Playoffs since 1995. Despite the consistent hope and hype that surrounds the team’s fanbase every year, their drought has lasted more than two decades.

Well, Mississippi weekend news anchor Ethan Bird, who occasionally handles weather, sports and other duties throughout the week, took his opportunity to remind Dallas and its fanbase of their woes. He used a simple, but extremely vicious one-liner to troll the Cowboys on Monday.

While delivering the 10-day forecast for the Meridian, Mississippi area, Bird pointed out the extreme heat coming through the region this week. In doing so, he used the 90+ degree temperatures to slide in his brilliant jab.

“Now we look at our ten day forecast. It’s looking a little bit like those Dallas Cowboys, it’s peaking in the ’90s,” Bird said.

So simple, so funny. Bird saw his chance and took it.

This is why you don't let the sports guy do weather… 🤣 pic.twitter.com/47S6QtlODg

While sharing his four-second quip, Bird joked that his viral moment is a direct result of letting the sports guy do weather. He also offered an olive branch after the clip took off and more than three million people saw him breakdown the heat.

This all blew up more than I could have ever imagined lol.

Hello to those of you that are just meeting me today haha https://t.co/qCvYJqN6EM pic.twitter.com/qtEv7iM26m

Mississippi does not have a professional football team, so their fandom is rather split. However, there are quite a few Cowboys fans who were presumably watching Bird’s newscast and got caught with the stray. Pretty hilarious stuff and incredibly well-executed!