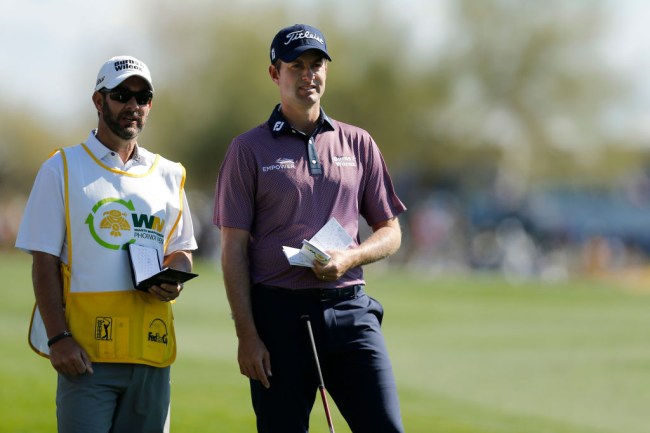 After winning the Waste Management Phoenix Open earlier this month, Webb Simpson took the past couple of weeks off and had some time to plan something fun during his break.

The six-time PGA Tour winner decided to pull a little prank on his longtime caddie Paul Tesori with some help from one of his main sponsors, Footjoy. Tesori is one of those guys that keeps it pretty simple when it comes to his clothes as Simpson points out in his post, he’s a very neutral guy when it comes to his outfits, so that opened the door for a scripting prank.

As you’ll see below, Footjoy sent Tesori an email saying that they had started a new program to highlight some of their staffer’s best caddies with an apparel scripting program. The program was going to start at this week’s WGC-Mexico Championship and the clothes were far from ideal.

The outfits flirted on that line of ‘oh hell no I can’t wear this and I guess I’ll take one for the team’ perfectly.

Simpson and Footjoy kept the prank going right up right until the Wednesday prior to the first round of the event down in Mexico, so they certainly kept Tesori on his toes until the final hours. Just a good, clean old-fashioned prank.

My caddy, @paultesori (aka Buhdro) is conservative when it comes to clothing. Solids. Safe colors. Navy. Black. White. Grey. No patterns. Def no flowers and absolutely no pastels. So with the help of my friends @footjoy, we decided to have a little fun with Pauly T. Swipe right to see it unfold… #Scripted #Patterned #Gotem #WGCMexico #Pranked

After Simpson revealed it was just a prank, Tesori decided to turn the whole situation into a great moment as he is auctioning off the signed shirt to a random winner that donates just $3.21 to his family’s foundation.

Anyone that donates $3.21 to @tesorifamilyfdt between now and Monday at 5pm will be entered to win this @footjoy shirt signed by @webbsimpson. Isaiah will draw the winning name! pic.twitter.com/EEL2misOgc