Weber State QB Suffers GRUESOME Broken Leg, Tells Staff To ‘Tape It Up’ So He Can Go Back In 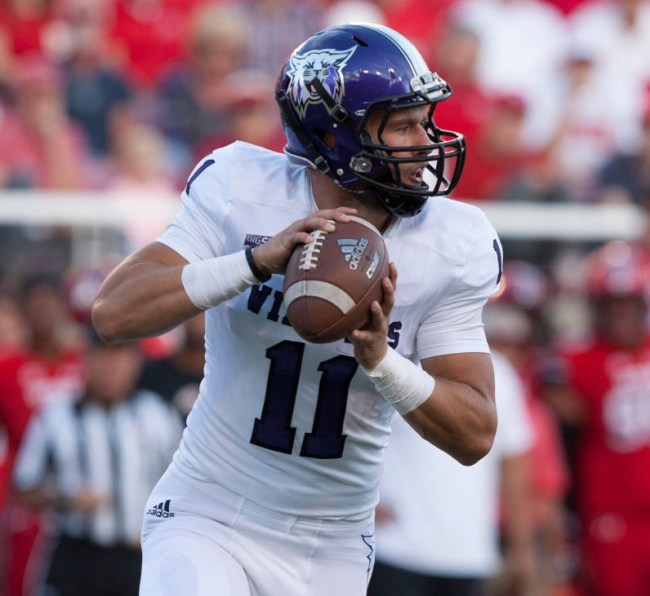 Weber State QB Kaden Jenks pulled a move straight out of the NHL on Saturday in the Wildcats’ game versus Montana State when he suffered a horrific broken leg.

The freshman quarterback had come into the game off the bench in the first quarter and was in the midst of completing a six-yard run when he was tackled and his ankle was TURNED BACKWARDS 180 DEGREES.

The result of the injury — his foot was turned backwards 180 degrees — was visible from the press box above the field, where it elicited gasps and groans.

The game was delayed while Jenks was tended to. Players returned to their sidelines and knelt down. Jenks was eventually carted off.

And when they say, “eventually” carted off, they mean it, because Jenks wanted to stay in the game. What?!

“Kaden Jenks is such a tough guy and such a loved guy on our football team,” [coach Jay] Hill said in comments provided by the Standard-Examiner newspaper. “When they (set) that ankle back into place, he said ‘Tape it up and let me go back in there.’ I’m like, ‘Just calm down a little bit.’

“But that’s the toughness that can rally a football team. Our team got in a huddle and I heard them say it: ‘We’re going to go win this for Kaden.’ That’s what you want to see on a football team is to bind together over something like that.”

Jenks had already scored on an 8-yard run in the second quarter, his second rushing TD of the season, to give the Wildcats their first points and make the score 10-7. Following his gruesome injury, Weber State scored 27 more points to give the seventh-ranked quad a 34-24 victory.

[Montana State coach Jeff] Choate couldn’t say whether or not the gruesome nature of the injury had any kind of an effect on MSU’s defensive psyche for the remainder of that possession, but he definitely thought the resulting touchdown swung the momentum.

Kaden Jenks: Bro of the Week? (WARNING! Not safe for life photo coming up below.)