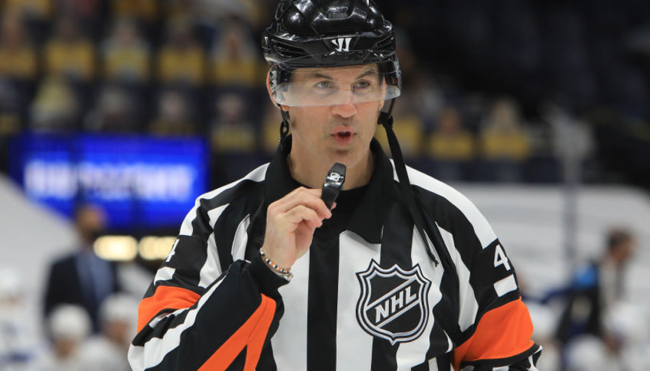 As a general rule, anyone who officiates a professional sport for a living and manages to become a household name amongst the majority of fans who follow the game they’re tasked with mediating got there by being absolutely abysmal at their job; if nobody knows who you are, you’re probably doing something right.

However, there are some notable exceptions, including one man who falls all the way on the other end of the spectrum that’s home to the likes of Angel Hernandez and Joey Crawford: Wes McCauley.

McCauley played college hockey at Michigan State and bounced around the minor leagues before working his way up the officiating ranks on his way to making his debut as an NHL ref in 2003. Since then, he’s set the bar when it comes to keeping order on the ice, as almost half of the players surveyed in 2018 said they considered him the best ref in the league.

McCauley recently tried his hand at a different kind of officiating when he conducted the nuptials at a wedding for a couple who tied the knot in Maine, and after the ceremony, he pulled off an incredible flex when he posed with the bride and groom and revealed the amazing easter egg hidden inside the jacket of his suit: a piece of his ref’s uniform sewn into the lining.

It doesn’t get much more baller than that.