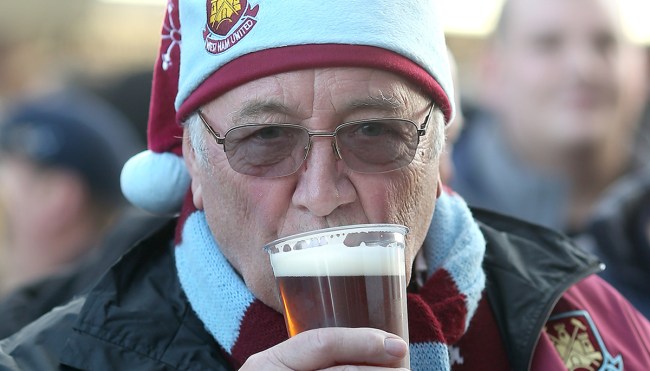 It’s hard to truly appreciate just how seriously a lot of people in the United Kingdom take their soccer unless you’ve had the chance to experience a match for yourself.

College football is probably the only sport in America home boasting similarly rabid fanbases with the borderline religious devotion many fans across The Pond have for their hometown club (as well as their visceral hatred for their rivals),

With that said, it’s still hard to match the passion you’ll find in Britain and the many other countries where real football reigns supreme; after all, I can’t think of any schools that have had issues with roving gangs of supporters intent on violently defending their team’s honor to a point where stadiums were forced to erect fenced-in areas to keep competing factions from attacking each other.

However, there is one passion British soccer fans share with their American counterparts: using games as an excuse to get hammered. Unfortunately, that beloved pastime recently became particularly cost prohibitive for fans of one Premier League team that’s reportedly considering legal action due to the ensuing backlash.

According to The Daily Mail, spectators who attended West Ham United’s season opener at home against Man City on Sunday got a rude surprise when they went to buy beer and discovered a pint would set them back £7.30 ($8.90)—up from the £5.85 ($7.13) it sold for at London Stadium last season.

The club initially took up the issue with Delaware North, the company tasked with concession sales. However, the company claims all price reductions must be approved by the venue (although it’s unclear if approval was needed for the initial increase).

Now, the outlet claims West Ham is willing to sue the stadium over the 25% spike, which supposedly violates the “comparable clubs” clause in the contract that mandates the price of beer should be on par with the “mean prices at Arsenal, Tottenham, and Chelsea.”

I think most Americans would agree West Ham fans are still getting one hell of a bargain, but it’s also easy to understand the frustration.