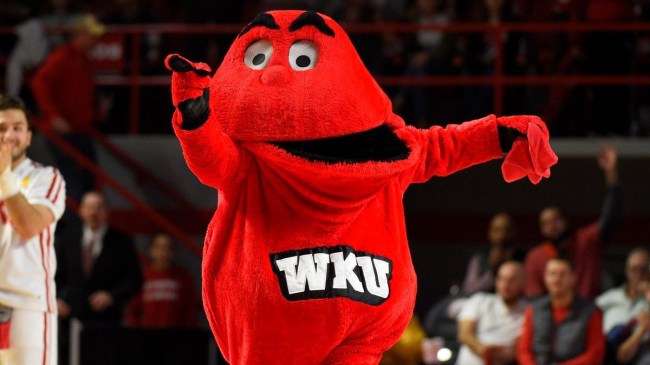 This could well be considered heretical as a Penn State graduate, but Western Kentucky’s Big Red is the best mascot in all of college athletics.

Not only is Big Red just genuinely hilarious, but he’s also the start of one of the greatest “This is SportsCenter” commercials of all time.

Most mascots are great (regardless of what the Lopez twins try to make you believe). Thankfully, I’ve got some particularly great ones as a Philadelphia sports fan. (No, not you, Swoop).

But Big Red belongs in the pantheon of all-time great mascots. And he’s secured himself that spot with Western Kentucky’s fantastic new football helmets.

Western Kentucky Puts Big Red On It Football Helmets, Googly Eyes And All

Big Red has been on a quest all season to get himself on the Western Kentucky football helmets. He even enlisted the help of football players and strength and conditioning staff members.

Big Red felt much better after Jaden's pep talk last week. This week, Josh helped Big Red get in the gym and get right.#GoTops pic.twitter.com/bSo4AY5Tzl

But that didn’t work. So he did what any smart mascot does. He went straight to the top. Big Red banged down the door of university president Tim Caboni, who then helped him on his quest.

Caboni not only agreed that the university’s most cherished representative belonged on the helmets. He physically helped him get there.

Not only do the incredible new helmets feature what I can only imagine is 500 pounds of Big Red twisted steel and sex appeal, but they also have the best damn visors you will ever see in your life.

The Hilltoppers are 6-4 thus far in the 2022 season, but you can pretty much pencil in a W against Rice on Saturday. Because when you look that good, there’s no way you could lose.

WKU then finishes up the regular season with a showdown against Auburn, which is currently in crisis mode after firing head coach Bryan Harsin less than two years after hiring him.