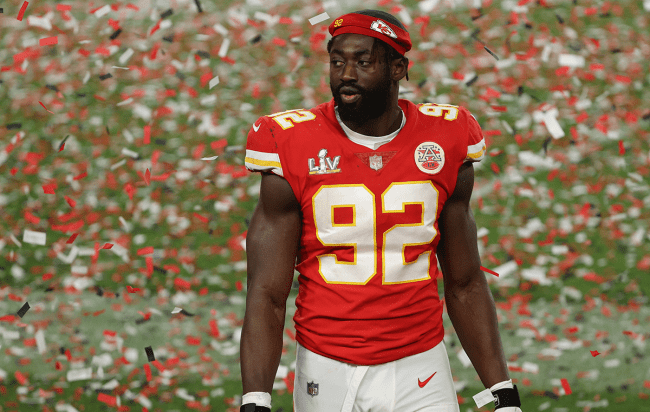 I’ve always been of the opinion that whoever gets paid to roam the field with water bottles in search of an open mouth to make sure football players don’t have to exert precious energy hydrating themselves during a game has the most thankless job in sports. However, whenever the Super Bowl rolls around, there’s another group of arguably more unsung heroes that jumps into action to congratulate the winning team by doling out some complimentary commemorative swag that seemingly materializes out of thin air.

On Sunday night, Tom Brady raised the Lombardi Trophy for the seventh time while clad in a shirt honoring the championship he helped bring to the city where Super Bowl LV was played. It will now join the six others he earned the honor of donning during his time in New England, where he could’ve walked away with a total of nine if it hadn’t been for the pesky meddling of Eli Manning and the Philadelphia Eagles.

As someone with an unhealthy affinity for ironic t-shirts, I’ve considered the ones celebrating a Super Bowl victory that never happened the ultimate grail, so I’ve always been intrigued by what happens to the ones that remain boxed up when the confetti starts to fall when The Big Game comes to an end. As a result, I was amped to get a chance to talk with Matt Connelly ahead of this year’s contest, as it’s hard to imagine a better person to shed some light on the topic than the CEO of the organization responsible for distributing the neglected apparel to people around the world.

As you probably know, the NFL has made it its mission to make sure the shirts, hats, and other pieces of clothing produced for the losing Super Bowl team ultimately leads to a slightly more heartwarming story than the baby shoes at the center of the saddest six words Ernest Hemingway ever penned. Seven years ago, the league linked up with Good360 to ensure that is the case, and since then, the organization has coordinated with some of the over 90,000 non-profits it works with in the hopes one team’s misery can bring a bit of joy to people in need around the world.

The NFL does not waste a single second trying to persuade fans of the winning team to snag some clothing to memorialize the championship, as viewers are usually treated to an ad plugging the variety of merchandise they can get their hands on as soon as the game wraps up. However, things are set in motion long before that spot hits the airwaves, as the league starts whipping up various pieces of apparel to prepare for both possible outcomes well in advance, a process Connelly was kind enough to outline:

“To celebrate the moment in earnest, product needs to be prepared ahead of time. It needs to be sourced, manufactured, produced, and be available in a warehouse for shipping to the winning city and the winning fan base, literally immediately after the final whistle blows.

The quantity of that product at inventory needs to be built for both sides competing. The NFL didn’t want to throw away product that wasn’t going to be worn, so we worked with them collaboratively on different ways that we could find a great use for it.”

Good360 also starts prepping ahead of time, as the process of getting the unworn clothing into the hands of people around the globe involves taking a number of different factors into consideration that I’d never even thought about before the conversation.

The organization works with its local partners (Connelly said most of this year’s unused gear will make its way to Eastern Europe, Eastern Asia, and Africa) to make sure the influx of goods won’t have a detrimental impact on the local economy or potentially offend people who might feel there’s a stigma associated with wearing something associated with “losers”:

“The goal is to raise people’s dignity and self-esteem. No one in the developing world or any of the communities that are under-resourced like getting second-fiddle stuff. We try to manage it with sensitivity and not make a huge splash.”

Reducing the environmental impact is also front and center, and Good360 and the non-profits it teams up with put an emphasis on that aspect while figuring out the logistics of transporting thousands of pieces of Super Bowl apparel (primarily shirts) around the world:

“We’re trying to prevent stuff from flying. If it can be moved by road, we look at how to reduce the distance it travels and where to place the product when it arrives so it’s close to the market where it’s being distributed…

Non-profits are very industrious and very innovative in regards to managing expenses because they have to, so for overseas shipments, they tend to go to via ocean and probably take around 30 days to get there on average.”

I managed to resist the urge to ask Connelly to hook me up with a shirt commemorating Kansas City’s nonexistent Super Bowl LV victory, but I couldn’t stop myself from asking if Good360 has ever thought about potentially auctioning off items to generate proceeds for the admirable cause it champions. Sadly, it doesn’t appear that you’ll be able to bid on those items at any point in the near future, but if that glorious moment ever arrives, you can feel free to send an Edible Arrangement my way for sparking the flame.

Good360’s partnership with the NFL and the other organizations it works with (including Major League Baseball) has really taken off recently, as Connelly also highlighted the staggering rise in the value of the unused items its helped hand out over the past couple of years:

The reason for that is companies are much more conscious and passionate about improving sustainability. It’s really important for them that they’re doing the right thing for the environment, keeping product out of landfills, and finding a great use for it. I think that’s a really neat movement that really gives us a lot of optimism.”

I’m sure the Chiefs would’ve preferred to walk off the field clad in the clothes that will be making their way to other countries over the course of the next month, but at least they can take a little bit of solace in knowing their loss was someone else’s gain.