What’s At Stake At UFC 280: Oliveira vs. Makhachev

#UFC 280
BroBible may earn a commission if you buy a product or service via links in this article.
by Dan ShapiroOctober 20, 2022 1:30 pm 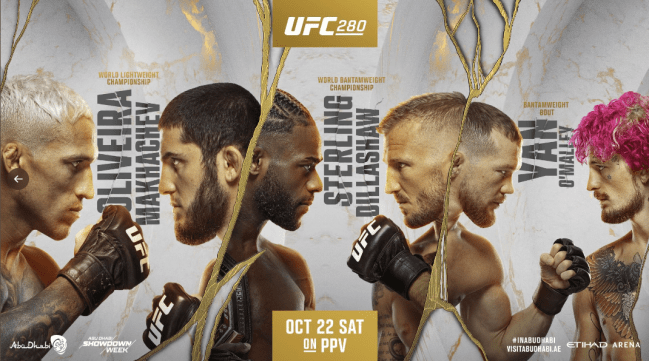 On paper, UFC 280 has all the hallmarks of a big-time mixed martial arts fight card.

With two title fights atop the UFC 280 marquee, the fight card not only features championship matchups in the UFC’s most talent-rich divisions, but it also hosts a pair of possible number-one-contender matchups, and a spread of current and former MMA champions.

It’s basically as stacked fight card as the UFC has ever promoted, and it all goes down this Saturday, October 22, at the Etihad Arena in Abu Dhabi.

Still a few days out from fight night, well fight morning since the ESPN+ PPV main card broadcast begins at 11 a.m. PST / 2 p.m. EST, it’s time to take a look at the fights, the storylines, the matchups, and yes, the bets.

Ever since the dawn of the UFC in 1993, the big question has always been which martial art is the most dominant? It’s basically kind of how the whole mixed martial arts phenomenon started.

With Brazilian Jiu Jitsu being the original “best base” for MMA, wrestling quickly became the centerpiece for many future champions, and the UFC 280 main event features two savants in these styles, with Charles “Do Bronx” Oliveira (33-8 MMA, 21-8 UFC, 1 No Contest) representing BJJ, and Islam Makhachev entering the Octagon as a dominant wrestling force.

Oliveira, who is the UFC’s all-time leader in finishes, submission, and fight night bonuses, arrives at UFC 280 in the midst of an 11-fight win streak. The most recent champion in the lightweight division, Oliveira was stripped of his title earlier this year after failing to make weight at UFC 274. It was one of the more controversial weigh-ins in UFC history, which might be why “Do Bronx” enters UFC 280 as the underdog.

Across the Octagon, Islam Makhachev (22-1 MMA, 11-1 UFC), a sublime wrestler and protoge of all-time great Khabib Nurmagomedov, enters his first UFC title shot on the heels of a 10-fight win streak, including four straight finishes.

Technically, the UFC 280 main event should be everything any mixed martial arts fan loves to watch. Sure, Oliveira and Makhachev are known for their grappling, but these guys are lethal in any position. And, as anyone who is familiar with MMA knows, oftentimes, ace-level grapplers can cancel each other out, which results in all stand-up affairs.

While Oliveira and Makhachev are still rather unknown to the masses, they’re both massive names in mixed martial arts, and in terms of skill and technique, this might be the most stylistically sophisticated lightweight title fight in UFC history.

In the three years since former two-time champion T.J. Dillashaw relinquished his belt for what would eventually be revealed as a failed drug test, the UFC bantamweight division has become the most competitive and talked about weight class in all of mixed martial arts. Standing atop that division is undisputed champion Aljamain Sterling (21-3 MMA, 13-3 UFC), who arrives at UFC 280 riding a seven-fight win streak.

With Dillashaw (17-4 MMA, 13-3 UFC) never losing his belt inside the Octagon, many wonder if he can reclaim the title for a third time. However, in the years since his suspension, Sterling has risen to the top of the weight class by using his exceptional wrestling and Brazilian Jiu Jitsu.

On the feet, Dillashaw appears to have a clear advantage. His sophisticated striking approach, which is an adaptation of Dutch kickboxing, relies on setting traps with feints and lateral movement. Dillashaw is also a high-level wrestler, which may nullify Sterling’s entries and takedown attempts.

Sterling, the favorite in this fight, should never be overlooked, however. Not only has he already proven an ability to take down opponents and win rounds cleanly, he also has a size and strength advantage over almost any bantamweight in the UFC.

Without a doubt, this will be what MMA fans like to call a high-level chess match. The main question is if Dillashaw can keep the fight on the feet, or if Sterling can take it to the mat?

Is “Sugar” Sean O’Malley (15-1 MMA 7-1, 1 No Contest UFC) the biggest star on the UFC 280 fight card? Some might disagree, but in terms of opportunity cost, the answer is yes. But a more important question is, ‘Is he ready for former champion and number-one contender Petr Yan?’

O’Malley has been a fan favorite, sort of an MMA supernova, ever since his turn on Dana White’s Contender Series in 2017, when Snoop Dogg called his viral knockout from the commentator booth. Ever since, he’s been one of the UFC’s top draws, using his length and distance management to unleash a bevy of highlight-reel knockouts.

While many pundits have criticized UFC matchmakers for coddling O’Malley, giving him easy showcase fights, no one can ignore Yan (16-3 MMA, 8-2 UFC) as the highest of high-level opponents.

For Yan, the focus has always been on his boxing. One of the hardest hitters in the bantamweight division, Yan has a compact frame and stance, and understands how to move into close range to land punches in bunches, while slipping out at the right time to avoid taking damage. He’s a classic in-fighter, living in the pocket, exactly where MMA fans like to see the action.

While the UFC hasn’t said so specifically, it’s very well understood that the next challenger for the bantamweight tile will likely be the winner of this fight (there are a few other candidates like Chito Vera, Cory Sandhagen, and Merab Dvalishvili), so the stakes couldn’t be higher. However, having already lost two of his last three bouts and entering as the favorite, Yan has more pressure on his side.

Stylistically, O’Malley, a counter striker, has the size and reach advantage, which plays into his game perfectly. Yan will likely need to absorb some damage in order to land his combos.

From a betting perspective, this fight presents some rather interesting action, as O’Malley (+255) enters the Octagon for the first time since March 2018 as an underdog. Given his popularity, that line will probably change quite a lot leading up to fight night, and when examining the exes and ohs, it’s clear that O’Malley is a very, very live dog.

Chances are, most of you have never heard of Beneil Dariush (21-4 MMA, 15-4 UFC), but back in March 2020 at UFC 248, he delivered a crazy comeback knockout that sent Joe Rogan into a frantic tizzy.

Given his quiet demeanor, Dariush has maintained a rather low-profile during his eight-year run with the UFC. However, in the Octagon, the UFC’s sixth-ranked lightweight has been lethal, finishing eight opponents, while earning five fight night bonuses.

Interestingly enough, Dariush, who is riding a seven-fight win streak and was initially tapped as the backup fighter for the UFC 280 main event, only to be replaced by featherweight champion Alexander Volkanovski, actually comes from a Brazilian Jiu Jitsu background, which he’ll definitely need against surging lightweight Mateusz Gamrot (21-1, 1 No Contest MMA, 4-1 UFC).

Currently ranked ninth in the 155-pound division, Gamrot is a former KSW world champion and owner of four fight-night bonuses in his first five UFC fights. Gamrot is fast and technical, with an exceptional fight IQ and Octagon awareness. He’s a complete MMA fighter and dangerous in any position, much like Dariush.

While these two fighters may not have the biggest names, they’re known for action and delivering exciting bouts. This one should be no different; it’s definitely one for the hardcore fans. And, don’t be surprised if Dariush secures a title shot should he win at UFC 280.

In terms of quality, the UFC 280 PPV on ESPN+ is about as high as any fight card the UFC has ever promoted. All of the matchups are competitive, with high stakes, and anyone tuning in on Saturday, October 22, will definitely get their money’s worth.

Where it kind of drags is the lack of superstar power, but real combat sports fans already know that names don’t always equate to action and excitement.

Interestingly enough, the two biggest names at UFC 280 won’t even be competing, but rather in the corner of lightweight title challenger Islam Makhachev: all-time great Khabib Nurmagomedov and new UFC signee Hasbulla Magomedov, the diminutive trash talker who will likely fight in Mark Zuckerberg’s UFC Metaverse.

It’s a strange proposition to think that these sidemen add value to the action, but all of that is really just adding style points to a fight card that already has such incredible substance.

It’s an A-level card, and without a doubt an event that combat sports fans won’t want to miss.

Now, let’s see how it all plays out on fight day.