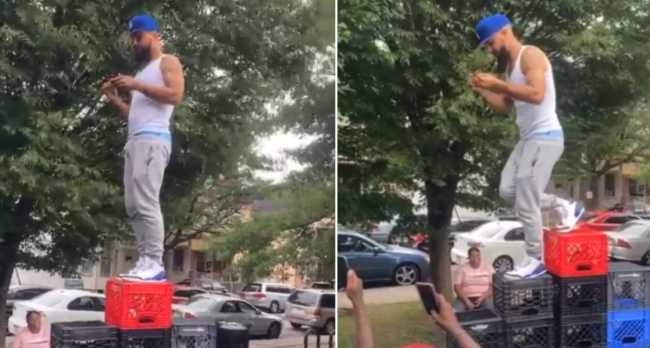 A dude named “White Mike” completed what few could do and he did it in the most impressive way possible.

For the past week, videos of people attempting to walk across a pathway of milk crates have gone extremely viral on social media. Dozens of people have been filmed falling over and getting themselves hurt trying to complete the “Milk Crate Challenge.”

You making it across this milk crate madness?! pic.twitter.com/PqSF8owaff

I could watch milk crate challenge videos all day 💀😭 pic.twitter.com/anGwTMrIN8

One man by the name of “White Mike” not only completed the “Milk Crate Challenge” but he did it while rolling a blunt and it is absolutely amazing.

Here we have the official Gold Medalist of the Hood Olympics
pic.twitter.com/bU6X0eHBei

“White Mike” is deservedly being named a legend for his accomplishment.

This is the most athletic feat I’ve ever seen https://t.co/MTBozjQsmC

This is the coolest person that has ever existed https://t.co/HPKGiusU8a

This needa be in history books https://t.co/3woHroiJaA