White Sox Fan Tweets He’ll Get A Leury Garcia Tattoo If He Homers, Which, Of Course, He Immediately Does, Twitter Reacts 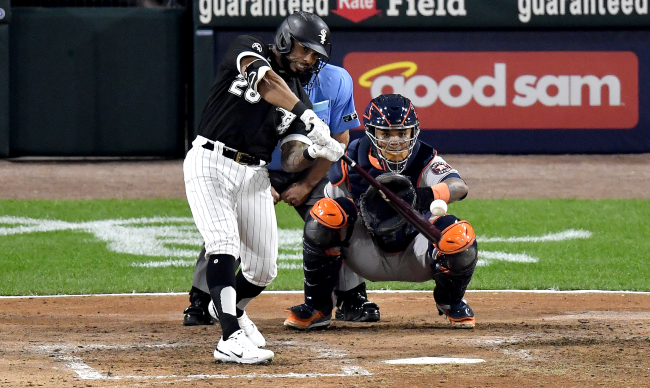 After two poor showings in Houston, the Chicago White Sox exploded for 16 hits and 12 runs in Sunday’s ALDS Game 3 drubbing of the Astros.

One of the most unlikely heroes of the day for the Southsiders was utility man Leury Garcia who batted .267 with just five home runs in 126 games.

In the bottom of the third, after Grandal hit a two-run homer to cut the Astros’ lead to 5-3, Garcia stepped up with two runners on and absolutely crushed a 2-0 pitch 436 feet to center for a three-run homer.

Little did Garcia, who ended the night with four RBI, know, his big blast to give the White Sox the lead would end up costing one fan who begged for him to do it.

“If Leury hits a homer here, I’ll get a tattoo in his honor,” Twitter user @gilxred tweeted, as Garcia was getting set to bat.

if leury hits a homer here, i’ll get a tattoo in his honor

Be careful what you wish for, because as we know, Garcia did exactly that. Something that did not go unnoticed by a ton of fans on Twitter including who ever runs the Chicago White Sox social media.

A promise is a promise. https://t.co/k4vDwzBEev

Now you have to do it pic.twitter.com/aZpH0wYUHb

Sox retweeted this you gotta do it!

The @whitesox just retweeted it, now you either do it, or delete your account and go into hiding. Lmao

Twitter user @gilxred, after being flooded with people telling him he had to get the Leury Garcia tattoo now, claimed he would be a man of his word.

ILL DO IT I PROMISE

According to WBBM Radio’s Rob Hart, the White Sox fan is definitely going to follow through, so stay tuned.

He's going through with it. Story to come on @WBBMNewsradio https://t.co/ZXvlW0WKxG