There are a ton of different factors that all play a significant role when it comes to realizing the dream of basically every kid on the planet by playing a sport for a living. However, there’s one attribute that seems to give you a particularly sizeable leg-up on the competition: being the child of a professional athlete.

It shouldn’t come as a huge shock that basically every pro league is home to players who were born with the genes of a world-class athlete and had the chance to spend their formative years learning from the best. That’s especially true when it comes to Major League Baseball, which features a sizeable list of guys who followed in their father’s footsteps on their way to The Show.

That includes notable names like Ken Griffey Jr., Roberto Alomar, and Prince Fielder, and now, a new prospect is well on his way to joining their ranks in the form of CC Sabathia 17-year-old son Carsten.

Who Is Carsten Sabathia? 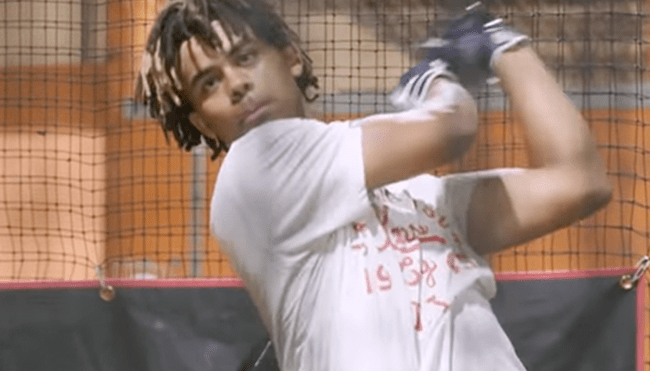 Carsten Sabathia let Whistle get a peek at his workout routine for the most recent installment of “No Days Off” at the New Jersey gym where he’s been training since he was 13 years old. The regimen whipped up by his trainer (who also helped Action Bronson shed an insane amount of weight) incorporates a variety of different exercises and disciplines to enhance his performance (and longevity) on the baseball diamond, but he also has another pretty helpful mentor: a Cy Young Award-winning dad who pitched for 19 seasons in the MLB.

While being the son of CC Sabathia certainly doesn’t hurt, Carsten’s famous dad said he never pressured him to play baseball and makes it a point to avoid critiquing his game unless asked for advice. However, he’s also more than happy to lend an arm in the batting cage that Carsten routinely makes 5 A.M. visits to before heading off to high school.

His work ethic is reflected in the accolades he’s received, as Carsten was one of the lucky few to receive an invite to the Perfect Game All-American Classic, a prospect showcase that’s essentially an All-Star Game featuring the best high schoolers in the United States. However, based on the evidence at hand, it seems like he’s just getting started.