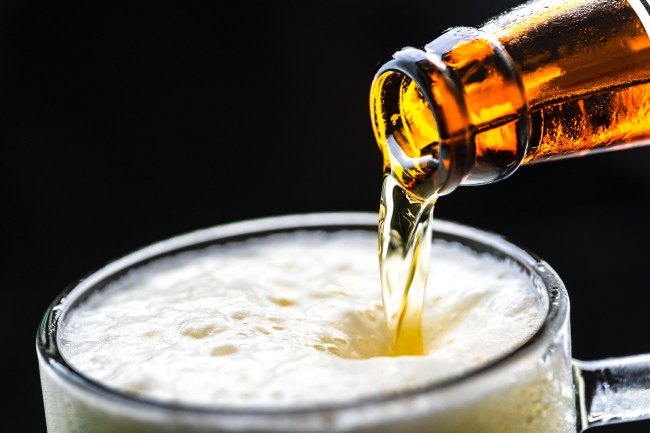 One would surmise that there wouldn’t be a better spokesperson for big beer than star NFL players. Prominent beer companies already spend ungodly amounts of money advertising during NFL games. In 2015, Anheuser-Busch InBev paid the NFL $1.4 billion so that Bud Light could be the official beer of the National Football League. Bud Light had already been the official NFL beer since 2011 and the new blockbuster deal extended the sponsorship through the 2022 Super Bowl.

The reason you don’t see active NFL players in beer commercials, even in commercials for the “official beer of the NFL,” is because the NFL prohibits it. NFL players are prohibited from being spokespeople for beer or liquor companies while they’re playing. The Alcohol and Tobacco Tax and Trade Bureau (TTB) restricts any marketing that links alcohol consumption to superior athletic performance.

That’s why major sports leagues including the NFL, NBA, and MLB were reluctant to allow players to shill for beer companies. The leagues didn’t want extra scrutiny from the government for using athletes to promote alcohol. Which is rather hypocritical since after teams win important games the victorious players are seen guzzling and even showering in beer and champagne in post-game celebrations that are broadcast everywhere.

However, that all changed last week when Anheuser-Busch InBev signed sponsorship deals with the players unions of Major League Baseball and the National Basketball Association. With the NBA and MLB grabbing that desirable big beer money, NFL players will certainly want their fair share of the advertising dollar pie.

The NFL players union will certainly point out the hypocrisy that the league rakes in billions promoting alcohol and players are forbidden from doing so because they’re “role models” or some other poppycock “reasoning.” The current NFL Collective Bargaining Agreement ends after the 2020 season, so expect this rule to change then when it is added to the new deal.

There is quite a lengthy history with retired football players starring in beer commercials, dating back to the 1970s. Former New York Jets running back Matt Snell appeared in the Miller Lite’s first commercial in 1973, only months after getting hit so hard that he had to get his spleen removed and then retired.

That opened the floodgates for former NFL players such as Bubba Smith, Dick Butkus, and Deacon Jones to star in Miller Lite commercials. The beer ads also featured comedian Rodney Dangerfield and MLB player turned announced Bob Uecker. The ad campaign ignited the heated debate as to whether the best aspect of Miller Lite is that it “Tastes Great!” or that it contains “Less Filling!”

After Peyton Manning led Denver over the Carolina Panthers in Super Bowl 50, the Broncos quarterback told the world that he planned to “drink a lot of Budweiser” during the post-game interview. That was a free plug for Budweiser from Peyton. Manning was allegedly not paid for that impromptu endorsement that provided Anheuser-Busch InBev with about $3.2 million in media exposure. It should be noted however that Manning is the part-owner of two Anheuser-Busch distributors in his home state of Louisiana.

Bud Light did do a commercial honoring Manning for his retirement in 2017.