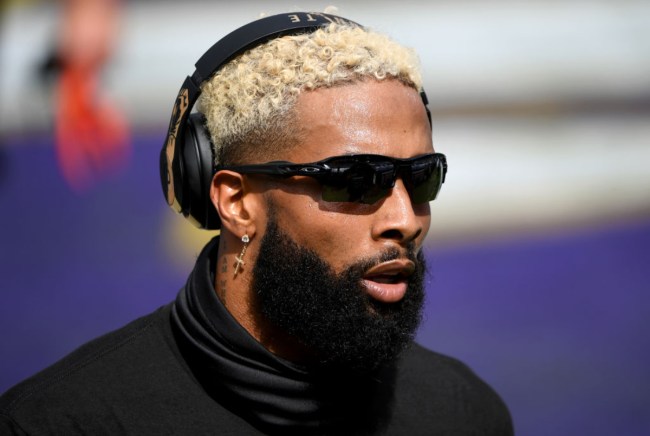 The six days between the Browns’ release of Odell Beckham Jr. to his signing with the Rams were eventful, to say the least.

According to one of Pro Football Talk’s sources, the entire process of trying to sign OBJ was “a cluster.” This shouldn’t come as a surprise to anyone who has been paying attention over the years, but Beckham Jr. was chasing attention and appreciation, and the Rams supposedly gave him the most, which is one of the reasons he chose to sign with LA.

According to PFT, after he was released by Cleveland, OBJ wanted to be claimed on waivers by the Seahawks. After that didn’t happen, he wanted to sign with the Saints. Then, shortly thereafter, he reportedly told some of his former Browns teammates he was getting set to sign with the Chiefs.

The Rams shared a tweet announcing that they had signed Beckham Jr., but quickly deleted said tweet. As all of this was going on, OBJ reportedly told NFL Network that he hadn’t made his decision yet and was still deciding on whether to sign with the Rams or Packers.

About a half-hour after deleting the tweet, Los Angeles fired the tweet again, this time confirming that it had officially signed OBJ.

This raises the question: did the Rams premature tweet actually play a role in Beckham Jr. choosing to sign with them?

Based on the fact that he “loved the recruiting aspect” of his brief free agency. OBJ wanted to feel “love” from the team he was going to sign with, so maybe the Rams took things into their own hands and that simple tweet showed just how much they wanted OBJ to join the franchise.

The power of social media, especially for someone with an ego like OBJ, is a very real thing.

Would it shock anyone to find out that a tweet was the cherry on top for OBJ to sign with the Rams? Absolutely not.