Kentucky QB Will Levis Is Using Name, Image, Likeness To Make Sure He Won’t Get Obliterated 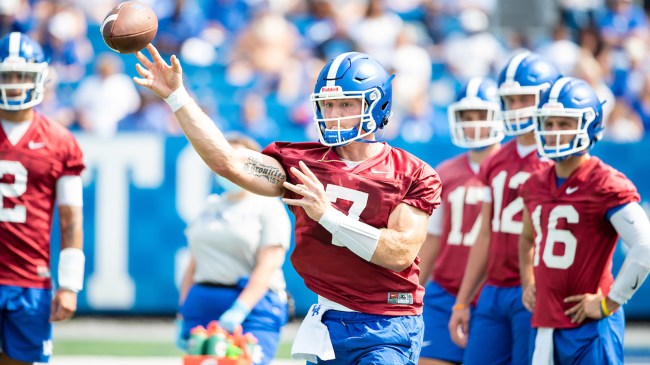 Kentucky quarterback Will Levis is one of the many college athletes to cash in on the new rules regarding Name, Image and Likeness. He, however, is also looking out for those around him.

Levis, who is a junior graduate transfer from Penn State, earned the starting job ahead of the 2021 season.

As QB1 in the SEC, opportunities for him to make money off of his NIL are endless in Lexington, and throughout Big Blue nation.

He is one of the many players around the country who have launched their own merchandising business and Levis is doing it all himself. Instead of bringing in a middle man that would take a percentage of the sales, Kyle Tucker of the Athletic reported that he is printing all of his merch at a setup back home in Connecticut.

“They have a screen printing setup back home in Connecticut, and once he launches a related website to take orders — he would like to get a couple of games under his belt first — Levis’ mother will begin cranking out branded shirts, hats and other gear. They’ve wisely cut out the middle man, some company that would do all this for them but also take half the profits.”

While making money for himself is important, Levis is trying to spread the love to his teammates.

“I really want to make sure, if it does get to the point where companies start reaching out to me, I’m using my leverage with them to help get deals for other guys on the team,” he said to the Athletic.

In doing so, he is also looking out for his own back— literally.

Success in football revolves around an offense’s ability to score points. To do so, a quarterback needs to be able to distribute the ball to another playmaker or take it himself.

At the forefront of that ability is the offensive line and the Big Uglies.

The success of each and every play relies on the ability of the linemen to ward off charging defenders. Levis knows that. Without them, he would get absolutely crushed on every play.

To make sure that his trench warriors are as happy with him as he is with them, Levis is making sure his NIL deals helps out his offensive line as well. Per the Athletic, he is trying to finalize a deal with a local steakhouse that would get his offensive lineman weekly meals at the restaurant.

Everything about this move is absolutely wonderful and hopefully it starts a trend for quarterbacks around the country. Take care of the Big Uglies!