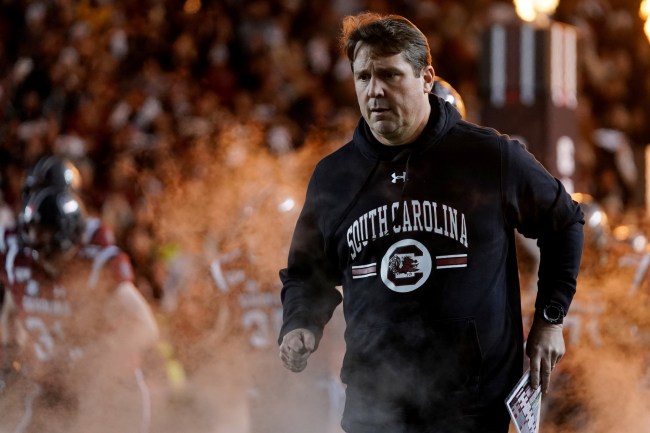 Will Muschamp and his South Carolina Gamecocks football team aren’t having the best season — and fans of the team seem to be noticing, voicing frustration in a variety of ways. While the Cocks did knockoff the then No. 4-ranked Georgia Bulldogs in Athens earlier this year, it’s one of the rare bright spots for a team that was supposed to compete in the SEC East. Unfortunately, that hasn’t happened, and Muschamp’s feeling the heat.

While it’s been reported that Will Muschamp will stay with the program in 2020 — unless something drastic happens the rest of the season — there are some South Carolina football supporters who would rather the school drop a cool $19 million to buyout the rest of his massive contract. Hey, we saw Florida State spend $18 million to get rid of former head coach Willie Taggart earlier this season, so maybe South Carolina does the same, right?

That may not happen, but, hey, it didn’t stop one guy from going out and advertising the idea, as a fan was seen dressed as Muschamp for Halloween holding a big, fake, $19 million check that signified the school buying him out. The result of his decision? An alleged fight with a South Carolina football manager.

According to the Post & Courier, a team manager named Aubrey C. Walker didn’t just confront the fake Will Muschamp a couple of weeks ago, but he physically attacked him, leading to Walker’s firing from the team. Take a look at details below.

Aubrey C. Walker, a USC student manager on Muschamp’s staff, was let go from his position after being arrested on Halloween night. Columbia police records show he was charged with public disorderly conduct and taken to jail after physically fighting with another man in Columbia’s Five Points district.

Walker “appeared to be intoxicated” at the time, the police report says, and continued to be “loud and boisterous” when an officer attempted to stop the fight. He was taken to jail and released the next day on a $257.50 personal recognizance bond.

“I heard one of the cops say, ‘He said he works for USC football,’” one person who witnessed the incident said. “I thought, ‘Oh, that makes sense.’ He never said a word the entire time but he didn’t like that check.”

Man, it’s been a rough season for the South Carolina football team — and, rightfully so, people are pointing blame at Will Muschamp — but at least the coach has one diehard supporter in Walker, who will now have to spend time in the stands on on campus convincing Gamecock fans that Muschamp’s the man for the job. Hopefully he stays out of any future fights defending his opinion, though.