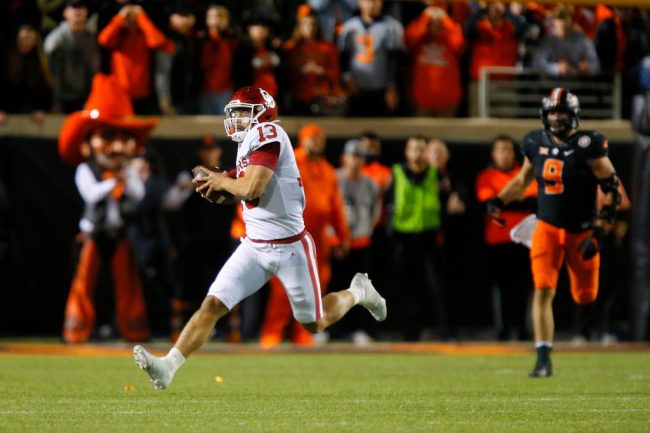 Just when we thought we were about to find out where Caleb Williams would transfer, a new team has entered the fray. Just last week, a report surfaced that Williams had narrowed his list to just two teams. Those two teams were USC and LSU. Now, there is reportedly a new contender for his signature.

Wisconsin has emerged as a true contender to land quarterback Caleb Williams, per On3's @HamiltonESPN.

According to On3's transfer portal rankings, Williams is the top-rated quarterback and prospect available.

It’s a surprising report as Wisconsin really doesn’t fit with the other schools Caleb Williams has been drawn to throughout his college career.

Oklahoma, LSU, and USC all have one important thing in common. They all have a history of getting quarterbacks drafted. In fact, all 3 have produced top 3 draft picks in the last 4 years. Oklahoma has produced 2 number 1 picks with Baker Mayfield and Kyler Murray. LSU had Joe Burrow drafted 1st. USC had Sam Darnold drafted 3rd.

Wisconsin doesn’t offer that kind of pedigree. Instead, the Badgers are known as a running back factory with the likes of Jonathan Taylor, Melvin Gordon, Montee Ball, and James White all playing for the team in recent years.

Their quarterback draft record has not been quite so prolific. Russell Wilson is the only quarterback the school has had drafted in the last 15 years and even he wasn’t taken until the 3rd round.

Maybe Caleb Williams sees some appeal in playing against Big 10 competition or believes he can win with Wisconsin’s strong running game and defense. Whatever the reasoning for this possible transfer destination, it seems unlikely they’d offer him the opportunity to put up the kinds of numbers usually associated with the number 1 overall pick.

Regardless of this new report, USC still appears to be the front runner for Caleb Williams, but fans will have to continue waiting to see where he will actually end up.