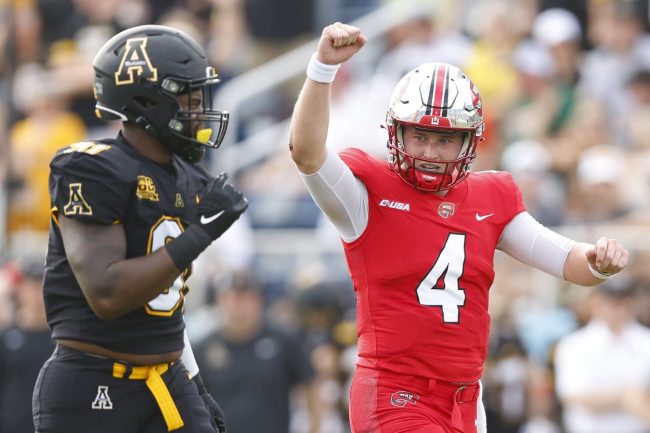 Western Kentucky quarterback Bailey Zappe finished up what is the greatest single passing season in NCAA history on Saturday. The 22-year-old Texas-native closed out his first and only season on the FBS level by breaking not one, but two college football records.

With just over a minute remaining in the second quarter, Zappe found his receiver for a gain of 44 yards. It put him comfortably over the 5,833 number and he didn’t stop there.

Later on the same drive, Zappe connected over the middle for six. It was his fourth touchdown of the game and it tied him with Joe Burrow for the most touchdown passes in a single season with 60.

When the Hilltoppers went to the locker room with a seven-point lead, it was certain that their Air Raid offense would have to continue to go to work in the second half. As a result, it was all-but guaranteed that Zappe would break Burrow’s record.

With six minutes left in the third quarter, Zappe looked left for an easy two-yard touchdown. He gave his team a 14-point lead in the process, but the moment was bigger than just a lead in a bowl game.

Zappe’s 61st touchdown made him the record holder for passing touchdowns in a single season. To make it even more impressive, he did it in one less game than Burrow.

Western Kentucky’s offense was quick to celebrate with him on the field and his wide receiver made sure to get him the ball. His coaches were there to greet him on the sideline and the smiles were as wide as could be.

Zappe wasn’t done. Three minutes later, he added touchdown No. 62 on the year.

Zappe’s success has been one of the best storylines in college football this season. He was a graduate transfer from Houston Baptist and had one season of eligibility left.

After choosing to join the Hilltoppers, he made the most of his opportunity and lit it up. Entering the Boca Raton Bowl, he was averaging 426.5 yards per game, which was No. 1 in the FBS by more than 20 yards per game. His 56 touchdowns led Alabama’s Bryce Young, who won the Heisman Trophy, by 16.