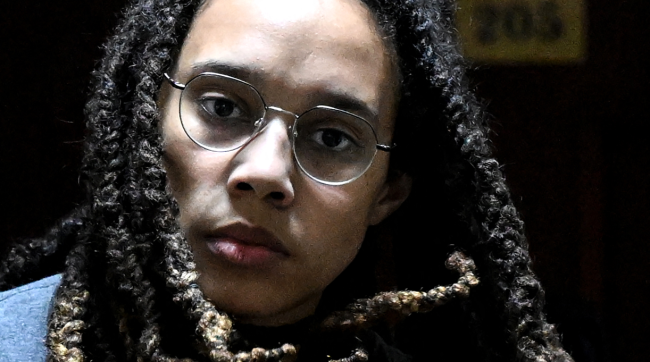 Thursday afternoon, a Russian court sentenced WNBA player Brittney Griner to nine years in prison after she pleaded guilty to illegally having vape cartridges containing 0.7 grams of cannabis oil in her luggage back in mid-February.

Thursday night, right before tip-off, the Phoenix Mercury and the Connecticut Sun held a 42 second moment of silence to show their support for the imprisoned Mercury star. Griner wore number 42 in the WNBA when she played for the Mercury prior to her arrest at a Moscow airport.

The WNBA also issued a statement addressing the moment of silence and the league’s stance on Griner’s imprisonment.

“Tonight, members of the Connecticut Sun join our colleagues on the Phoenix Mercury at half court for 42 seconds, Brittney Griner’s jersey number, to recognize the gravity of the moment and collectively send her strength,” the WNBA wrote.

“We are inspired every day by BG’s strength and we are steadfastly committed to keeping her top-of-mind publicly until she is safely back on American soil.

“We invite all of you here tonight to stand in solidarity with us,” the statement continued.

“Bringing Brittney and other wrongfully detained Americans home is the primary objective. We are and will remain focused and unified. This is a time for compassion and a shared understanding that getting a deal done to bring Americans home will be hard, but it is urgent and it is the right thing to do.

“It is time they come home swiftly and safely.”

Numerous NBA stars also expressed their dismay after Brittney Griner was sentenced to nine years in a Russian prison.

No way… 9 is crazy makes no sense

What is truly happening with our Queen @brittneygriner @POTUS @VP ? Please give us an Update.

Fan reaction on social media to the 42 second moment of silence was, perhaps not surprisingly, littered with negativity.

This made me cry. I ask everyone to give their support for Mr Whelan who is also in a Russian prisoner. We need to bring both of them home.

Would the WNBA consider a 9 1/2 year moment of silence?

being a hero for doing something wrong is baffling

Guys she didn’t die. She traveled with illegal drugs internationally and got caught.

The Biden administration has offered Russia Viktor Bout, AKA The Merchant of Death, in exchange for the release of Griner. The notorious arms trafficker has been in U.S. custody since 2008 for conspiring to sell weapons to a designated foreign terrorist group.

The Kremlin said on Friday that it would discuss a prisoner exchange with the United States, but that the negotiations must be kept out of the public eye, reports The Associated Press.

“If the Americans again try to engage in public diplomacy and make loud statements about their intention to take certain steps, it’s their business, I would even say their problem,” said Russian Foreign Minister Sergey Lavrov. “The Americans often have trouble observing agreements on calm and professional work.”

Kremlin spokesman Dmitry Peskov echoed Lavrov’s statement, saying “the U.S. already has made mistakes, trying to solve such problems via ‘microphone diplomacy.’ They are not solved that way.”

Meanwhile, Justin Bieber has offered his services should the United States need his assistance in freeing Griner.