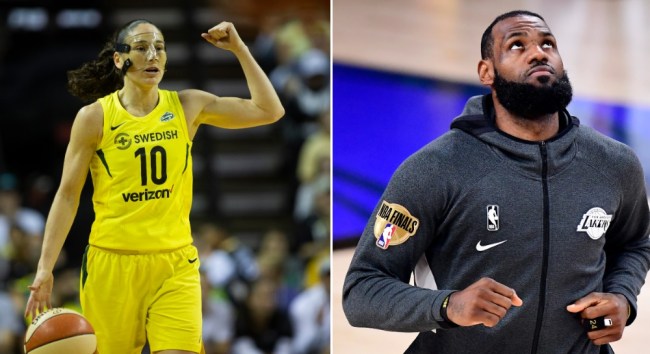 Sue Bird is one of the greatest WNBA players to play the sport, unfortunately, she only gets paid a tiny fraction of what her male counterparts make.

On Saturday, WNBA’s Erica Wheeler posted a graphic that showed how Bird and LeBron James had similar accomplishments throughout their careers yet had a huge pay gap between them.

PAY WOMEN ATHLETES AS MUCH AS YOU PAY MEN ATHLETES!!!! https://t.co/PXPS8L1ZON

I’m no math expert but this don’t add up right. https://t.co/AOeP9j2pKS

@WNBA this definitely needs to change and change in a hurry. The women's game of basketball has endured and is here to stay. That comparison is astonishing and difficult to look at. @ShakeBackSports what say ye? https://t.co/uaZGLHCJZi

Always working harder for the same line of work. Don’t give up ladies @Wnba. Keep paving the way. https://t.co/2gjXIMKCR5

One day WNBA player will get what they deserve https://t.co/vz2ggtl0tY

Others reasoned that LeBron makes more money because of the revenue the NBA brings in.

Players can’t get paid with money they don’t have. Business is business. https://t.co/DYjHIgZeo8

bring in the same amount of money get paid the same contracts, bring in less get paid less it’s that simple https://t.co/f0pkfKuUcC