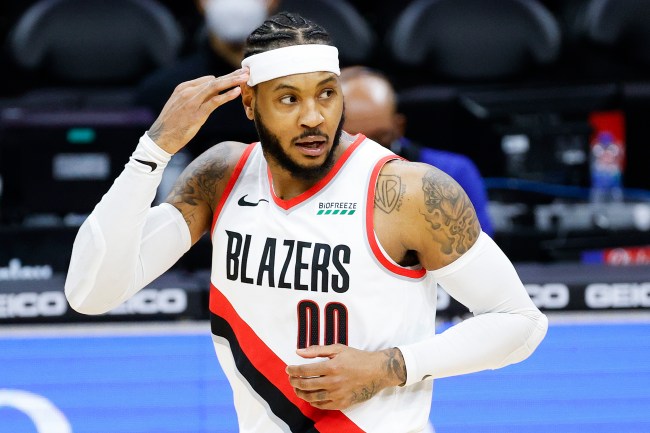 On Thursday afternoon it was revealed La La Anthony filed for divorce from her famous NBA husband Carmelo Anthony after 11 years of marriage citing “irreconcilable differences” as the main reason behind the end of their relationship.

News of the divorce comes after Hollywood Unlocked spoke to a woman who claims Carmelo fathered twins with her.

According to the outlet, the woman, who chose to remain anonymous, said she met Carmelo last year in New York and the two slowly developed a friendly relationship before it turned sexual despite the fact that she knew he had reconciled with his wife LaLa.

The woman explained that she met Carmelo in New York in 2020. After turning him down a few times, he insisted that he was not trying to hit on her but just wanted to be “cool” and “hang out.” Because of his good energy and vibe, she went along with it and kept in contact with him. She said during 2020, they talked almost every day and the two eventually hung out and later started hooking up. She noted that although she knew Carmelo was married, he came off as a single man because he would FaceTime her in his bed at his home, who he shares with LaLa Anthony, and noted that he didn’t even spend holidays with his family!

While she admits that she’s no angel, she says she honestly didn’t feel bad about seeing Carmelo because she alleges that she also knows “who’s f*cking LaLa too!” Aside from that, in September, the woman found out she was pregnant with twins

The woman claims that the twins were born prematurely and that one of the newborns had severe health problems. She went on to say she decided to come forward about the relationship because Carmelo has been hard to reach since the babies were born and she wants him to be a part of their lives.

As for her reason for speaking out now, she says she realized she’s been “living a whole lie” and it’s been eating her up inside. She has not told her family or close friends about her kids and even previously denied pregnancy rumors to protect Carmelo and his family.

Although he has provided a place and some money, she said that’s not enough for her kids who need to know who their dad is. “I’ve seen my wrong in the situation and I should’ve never let this get this far, but I don’t want my kids to suffer.” She even noted that she’s open to speaking with LaLa, but doubt she would give her the opportunity to talk things over.

Carmelo and LaLa had previously separated for almost two years after Carmelo allegedly got a stripper pregnant before reconciling in 2019.