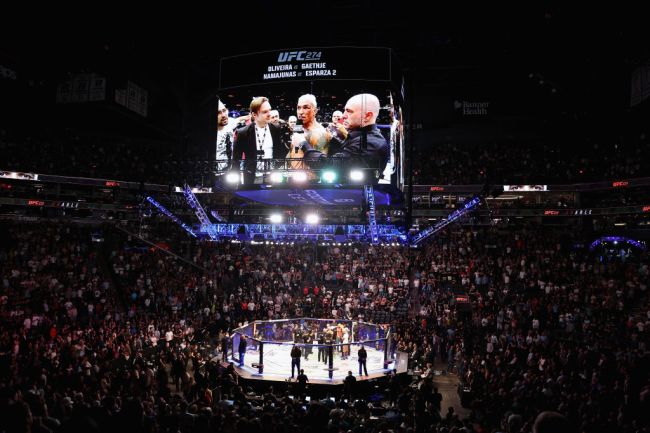 A little bit of weirdness isn’t all that uncommon for your average UFC weekend and it had to be what fans went into this past weekend expecting. After Charles Oliveira was stripped of his belt for missing weight partially because the athletic commission set up faulty scales backstage, weirdness just seemed guaranteed.

Weirdness absolutely ensued. Shortly after the fight card started, it was announced that Cowboy Cerrone had to pull out of his scheduled fight for the night due to food poisoning. Then in the co-main event, Rose Namajunas and Carla Esparza decided that a staring contest was the best path to winning the Strawweight belt.

However, somewhere in the midst of this card it appears things got really weird in the stands. A video surfaced today from UFC 274 that shows a woman, who was likely influenced by a few too many overpriced drinks, deciding to try and rush the Octagon some time after Charles Oliveira choked out Justin Gaethje. It did not go well for her.

A girl tried to rush the cage at UFC 274 and was launched by security as she attempted her ascent pic.twitter.com/u45cC1tZV8

This is a bad idea at any sporting event, but let’s consider exactly what you’re signing up for when you try this at a UFC event. There were two men in that cage trained to fight for a living, who had just slugged it out with each other. They likely have coaches in their corners who are all trained in at least one form of combat.

There are security guards all around the Octagon who at any moment, could need to restrain one of these fighters. If you get past all that, there’s even still the referee and personally, I wouldn’t choose to mess with Marc Goddard.

Sometimes in life, you make decisions and end up suffering exactly the consequences everybody would expect. That’s what happened to this woman when she chose to rush the Octagon after a UFC title fight and got absolutely annihilated by a security guard.