World Series Umpire Lance Barksdale Is Catching Hell For Blowing Multiple Calls, One Which He Blamed On Nationals’ Catcher 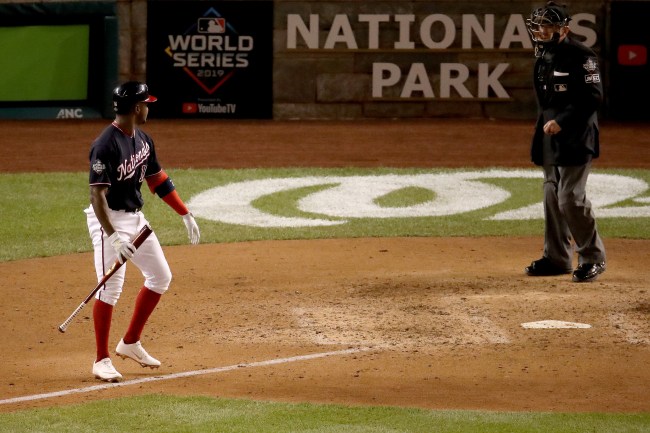 One of the most egregious no-calls came in the bottom of the 6th inning when Nationals pitcher Tanner Rainey should have been awarded a strikeout on Michael Brantley. Instead, Barksdale called ball and in a mic’d up exchange, he seemed to blame Nats catcher Yan Gomes for springing up too quickly to throw the ball around the horn: “Oh, so it’s my fault?” Gomes could be heard saying, sarcastically.

Ump doesn't call strike three. Tells Gomes he was taking off on him. Gomes replies 'Oh it's my fault?"

Then Martinez kindly asks the up to wake up because its the World Series. pic.twitter.com/iRUr349bQh

Then, in the 7th, Barksdale called strike 3 on a full count pitch to Victor Robles that was clearly high and outside, extinguishing a potential two out rally. Robles tossed the bat back toward Barksdale in disgust.

Victor Robles was just the victim of another blown call by Lance Barksdale#WorldSeries pic.twitter.com/IwhFS5JWag

What a godawful call by Lance Barksdale on strike three. (6) pic.twitter.com/ShGtLutG1H

Via https://t.co/74A2QGSpW3, not a good night at all for home plate ump Lance Barksdale, especially on the outer edge of the zone to righty hitters (plot is from the ump's POV) pic.twitter.com/jpqwDYa8tS

Look, being an umpire is hard. I am not quick to criticize someone who has to make a judgement call on 90+ mph pitches that all land within inches of each other.

That being said, Lance Barksdale has no idea where the strike zone is.

Lance Barksdale adding to the case for robot umpires. Always thought his name would be awesome for a dog soap opera.

Keep in mind the Nats last 7-1, so any error by the umpire is ultimately inconsequential when you can’t record any runs.