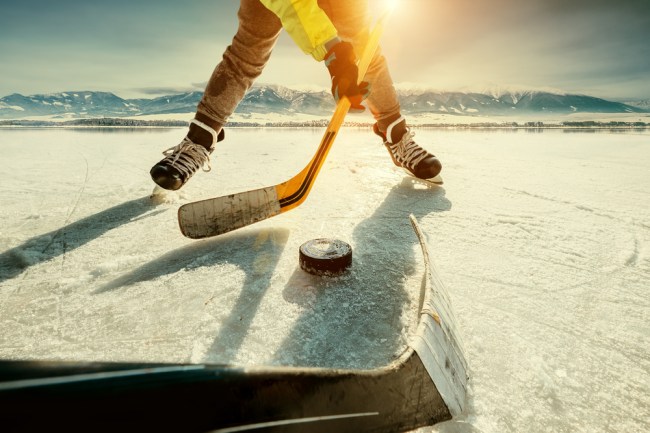 A record was just set for the world’s longest hockey game after 40 hockey players in Alberta played around the clock for 11 straight days, or 251 hours and 9 minutes in total. This remarkable world record-setting feat is even more respectable when you discover that the game was played to raise money for cancer research.

The origins of this game go back to 1991 when a man by the name of Terry Saik died of colon cancer. Before he passed away, Terry Saik asked his son, Dr. Brent Saik, to ‘keep kids out of The Cross.’ He was referring to the Cross Cancer Institute in Edmonton, and Dr. Brent Saik took his father’s final request to heart. He started out by organizing a few baseball and golf tournaments to raise money for cancer research, all of which were successful. But then he had the idea for the record-breaking world’s longest hockey game.

The first of the world’s longest hockey games were played 15 years ago. Each time the record has been broken with the most recent game which concluded last month (February 9-19, 2018 where the temperature hit -20F) beating the 2008 record of 250 hours, 37 minutes, 7 seconds which was set by another cancer fundraising group but that group’s based out of Buffalo. I was in the stands for the NHL’s 4th longest playoffs game ever (Ducks vs. Stars) that went 4 OTs with a total time of 78:06 so I can’t even fathom what it was like for these athletes to play for 11 straight days.

So what goes into setting a world record like this? Tim Campbell (@TimNHL) of NHL.com reports:

To be recognized by the Guinness World Records for the longest game, there are many regulations and the verification process can take six or more months. (The Buffalo game from 2017 is not yet recognized by Guinness.)
A real game with regular hockey rules and four on-ice officials must be played with two teams of 20 players. Five skaters and a goalie must be in play at all times for each team, and a video feed must be provided to Guinness officials. Once the game starts, no participant may leave the property until it’s finished. If someone is injured and can’t continue, no substitutes are allowed. Each player must be photographed on the ice at the beginning and end of the game.
The ice may be cleaned and resurfaced for 10 minutes after every hour of continuous play.
All of that dictates a schedule for the players that involves four-, five-, or six-hour shifts on duty, alternating with rest and sleeping periods. Most days, each player will play between 14 and 16 hours. (via)

For this game, each team generally scheduled out 6 skaters and 1 goalie for every hour of the tournament with the 6th skater subbing in for whoever was most tired at any given time. There was a team of around-the-clock medical professionals to provide treatment during the rest periods. Volunteers were on hand to serve the players meals. There were also showers available so they could stay fresh. When it came time to grab some shut-eye, most of the players had RVs on-site where they could take a nap.

With a little help from bees wax duct tape can fix everything!
To donate: https://t.co/KYSBNwbWzc#worldslongestgame pic.twitter.com/XGKRj373vO

The players used special skates because their feet would get so swollen after 11 straight days of playing around the clock. Beeswax was being consumed en masse to combat frostbite with the 20-below-zero Fahrenheit temperatures. The temps were so frigid that the athlete’s outer layers would be frozen solid as they stepped out onto the ice.

The first five games (2003, 2005, 2008, 2011, 2015) raised an astounding $3.4 million for charity. This year’s record-setting world’s longest hockey game raised $1.2 million for the Alberta Cancer Foundation and the Cross Cancer Institute with a final fund-raising goal of $2 million still in reach.

Brent and his wife! Have a great Valentine’s Day!
To donate: https://t.co/KYSBNwbWzc#worldslongestgame pic.twitter.com/GTKqVrDQIQ

The fortitude of these athletes is incredible. Reading them discuss what it takes to suit up in your gear around the clock for 11 straight days in sub-zero temperatures as your body is falling apart is a master class in the limits of the human body. I highly suggest reading the full story over on NHL.com and you can consider donating to their charitable cause at ‘WorldsLongestHockeyGame2018‘.