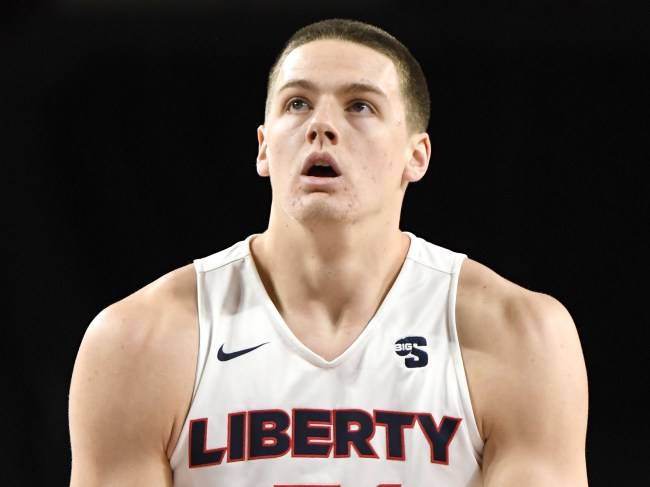 Over the years, soccer players have earned quite the reputation for being the softest athletes in the sporting world thanks to their impressive ability to make the tiniest bit of contact seem like a violent crime.

It’s hard to watch a match without seeing at least one player get ever-so-slightly clipped before diving to the ground like they’ve been shot and writhing in pain in search of a penalty while they wait for trainers to rush out onto the field and use their magic spray to help them make a miraculous recovery.

Of course, diving isn’t a phenomenon unique to soccer. Over the years, people have tried to figure out ways to cut down on such embellishment—like the NHL, where players can be penalized for trying way too hard in search of a whistle.

I’ve seen plenty of egregious dives and flops in my day but I don’t know if any of them have come close to being as egregious to one that’s making the rounds following an ASUN conference game on Sunday.

Liberty was playing Lipscomb for an automatic berth in this year’s NCAA Tournament and the teams were only separated by a single point with a little over two minutes remaining in the contest when Liberty’s Scottie James sank a basket to put his team ahead before this happened.

Liberty vs. Libscomb is electric! This flop is next level. pic.twitter.com/cdoieMd6Sf

Here it is from another angle:

FLOP. Liberty trying to flop their way into the tourney. pic.twitter.com/EsrEMXyyKA

There’s no denying James took a little bit of contact on his way down the court but there’s no way it justified his Oscar-worthy flop.

According to SB Nation, no foul was called on the play but Liberty ended up extending its lead before winning by a score of 74-68 to ensure they’ll get to take part in March Madness.