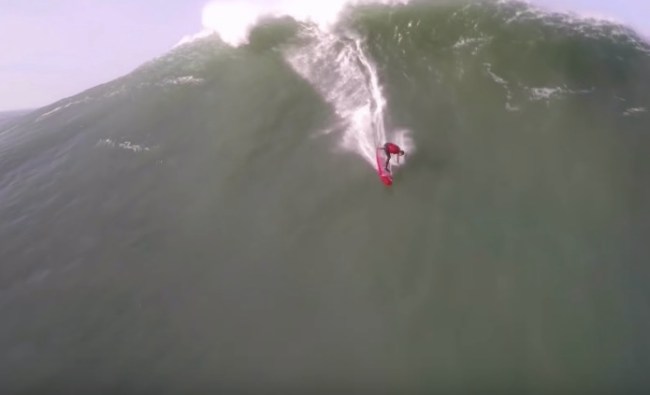 Big wave surfers are the craziest of the crazy. They get pulled into skyscraper-sized waves behind a jetski in hopes of riding a wave for at most a few seconds.

If they’re lucky, they’re able to eventually ride off into the side without getting sucked over the falls or having a colossal-sized wave come crashing down on them, knocking out all of the oxygen in their lungs, and holding them underwater for an unspecified period of time.

Nowhere on the planet are the waves larger than in the tiny fishing village of Nazaré, Portugal. A town on the Northern Atlantic ocean located on the Portuguese coast about halfway between Lisbon and Porto. Every year around late November and early December, the waves at Nazaré grow to unfathomable sizes. This break is home to the largest wave ever ridden, the Guinness World Record for the largest wave ever surfed.

I recently posted a short clip of the best wipeouts at Nazaré from a few weeks ago but that was footage from just one day at the surf break. This new clip from SURFER has spliced together absolute carnage from the past few weeks. It’s amazing that all of these surfers paddled away without snapping their spines in half.

If you enjoyed that footage of surfers wiping out at Nazaré methinks you’ll also enjoy this one of big wave surfers charging the break and actually riding some quality waves without busting ass.