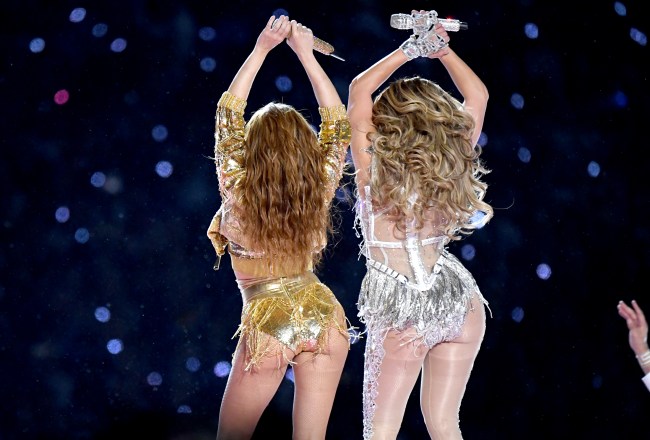 People will be talking about the Super Bowl LIV halftime show for years. That performance might end up being the most discussed moment in Jennifer Lopez and Shakira‘s careers despite them being two of the most famous singers on the planet over the past few decades.

Pretty much every person I’ve spoken to loved the show. I was indifferent about it. To me, it was basically a dance performance with some lip-syncing tossed in as an afterthought but it was still very entertaining when I prefer a halftime performance like Prince up there with his guitar. But with that said, I’d take a halftime show like J-Lo and Shakira’s every single year if it meant there weren’t any flops.

On the World Wide Web, there were a lot of loud-mouthed complainers saying the Super Bowl LIV halftime show was too scandalous. A Christian activist is saying he’s going to sue the NFL because watching that halftime show has put him in danger of going to Hell. That’s how batshit crazy some people out there have been about this. Jennifer Lopez has put her critics on blast.

As you can imagine, the FCC received A LOT of complaints from butthurt people. Letters basically claiming the Super Bowl LIV halftime show should’ve come with an NC-17 warning. Over at SBNation, they’ve combed through more than 1,500 submitted complaints to find the worst of the worst. Here are a few of those:

Poinciana, Florida
This years show was extremely provocative in the female body moments and the simulated patting of J Lo’s derrière is not for family television.

Issaquah, Washington
My family was very excited to watch the Super Bowl tonight. However, I was not prepared to explain to my 11 yo daughter why Jennifer Lopez was dressed so scantily or why she kept grabbing her crotch. My daughter was asking if she was feeling sick from having so much skin showing. Maybe next year the NFL can warn parents the show may not be appropriate for children so we can have them leave the room.

If these people don’t chill out we’re going to have Sesame Street Liveas the halftime show next year and it will never be fun again. They need to calm the hell down.

Grovertown, Indiana
The super bowl half time show was gross I am 50 and ashamed i saw that evil crap on tv . What about all the children that watched that. Then j lo had the American flag touch the ground. There should millions of dollars in fines.

Madison, Mississippi
The halftime show last night was beyond inappropriate. Shakira laying on her side gyrating like sex, Lopez on a stripper pole, Lopez bending over to expose her butt crack, both performers grabbing their vaginas, Shakira grinding her butt against some tinfoil wearing man’s penis. This was incredibly offensive. My children were watching.

De Soto, Kansas
Degrading and utterly disgusting, far beyond “community standards” of decency, and much worse than the Jackson incident. We live in eastern Kansas, but have no TV, thus took our 9 yo daughter to our local small-town sports bar to watch the game. She’s a farm girl, so understands sex, but could not stop asking “Mama, what’s all this?” Totally confused, and as she emerges into her young womanhood, absolutely abused. My wife and I did our best to use it as an object lesson, but when half the guys in the bar are voicing their disapproval and just looking down at the table … you know something is very wrong. Fox, and perhaps Pepsi, deserve a massive and painful fine so that nobody ever tries this barf-worthy nonsense again.

This next person really wrote out ‘J Low’ and thought to themselves ‘yup, this is it.’ They’re gonna read this and know I MEAN business.’

Atlanta, Georgia
What few community standards remain these days were stripped away (no pun intended) by “J Lo” (should be “J LOW”) at the half-time show shown on television for the Super Bowl on Sunday 2 FEB. My complaint is that this display is inappropriate on national television especially when children are watching. FIX IT.

Edmond, Oklahoma
The vagina grabbing, demeaning of females has to stop. This is a family show not a sexual predator show. Next time just show Robert Krafts message parlor videos!

Imagine being the person who lives in Las Vegas, the City of Sin, and was offended by the Super Bowl halftime show. How fucking clueless of a person do you have to be?!

I’m flabbergasted that anyone from Key West, Florida found something offensive when they live in a town that’s constantly inundated with naked people. Do they not go out side during Fantasy Fest?!

Groves, Texas
NOT FAMILY ORIENTED! ASS SHAKEN AND VULGAR COSTUMES NOT GOOD FOR YOUTH TO VIEW! How could you have stooped so low! No class! Only place that might belong was a strip joint! Last time I will watch! I know there is real talent out there. Proper attire please! Just sick of degrading stuff being shown to our youth. I’m a retired dancer but would never wear crap like that infront of a family show. Get your morals back on!!

Here’s the full Super Bowl LIV halftime show for anyone who wants a refresher:

Over at SBNation, they have a lot more of these outrageous FCC complaints. You can click here to check out all of the worst from the over 1,500 complaints submitted about the Super Bowl LIV halftime show.