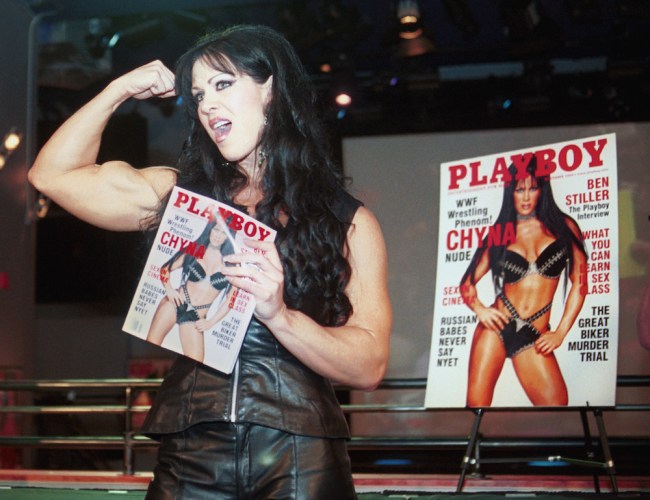 Chyna was a groundbreaking performer during her WWE run.

The “Ninth Wonder of the World” debuted in February 1997 as a bodyguard for Triple H.

Eventually, Chyna became an in-ring performer and became the first female performer to qualify for the Royal Rumble and King of the Ring tournaments. She’s the only female to win the Intercontinental Championship and the only undefeated Women’s Champion in WWE history.

Unfortunately, after leaving the company in 2001 due to a contract dispute, addiction got the better of her and she died at the age of 46 of an accidental overdose.

At one point, Chyna was one of the most popular performers in the federation. This led to an offer from Playboy to pose naked in the magazine. Chyna would pose in 2000, and again in 2002, even though Vince McMahon was originally against the idea.

According to Chyna’s former manager, Anthony Anzaldo, Vince was not only against Chyna posing but the WWE Chairmain blew his stack when she got breast augmentation surgery without telling the company.

Anzaldo recently spoke with WrestlingInc. about the situation for their “Documenting Chyna” series.

“They offered her the WWE Championship belt, but Vince said, ‘But you can’t do Playboy’ because she got offered to do Playboy. She chose Playboy over the belt.

She went and got her boobs done one week and didn’t tell Vince, and when she came back, he was f-ing pissed. That was her first boob job. And that boob broke.

Savio Vega, in the ring, chain match, he hit her in the t–s with his chain and popped one of her boobs. So she let that go for while. She got sick.

Ultimately, went to Thailand, got the boobs done, re-done but the guy did a bad job with the sewing around the nipples. So she’s opening a bag of chips and they sprang open, and so her nipples eventually looked like they were sort of splattered on her areola.

Anzaldo shared another story about showing up at WWE Headquarters with Chyna in 2015 to possibly make amends with the company, or at the very least find out if the star was owed any royalty money.

Anzaldo claims that in 2004, he contacted the company after seeing his client appear several times in a 20-year anniversary WrestleMania DVD.

“Oh my God, yes. We’ve been looking for her,” a WWE staffer told Anzaldo. They sent Chyna an $88,000 check not long after the inquiry.

When the pair showed up to the WWE offices in 2015, it didn’t take long for security to escort them off the premises.

There’s a big desk. There was a woman behind the desk. There’s four statues in the lobby. We stand out there, and I say, ‘Hello, my name is Anthony Anzaldo. I am here to see somebody in business and legal in regards to whether or not my client, who’s standing here next to me, Chyna, might happen to be owed some royalty. I don’t know if she is or not, but I’d like to find out.’

Within 15 seconds, there was five black suits in the lobby. All men and all saying to me, ‘We’re very sorry, but you guys are persona non grata and you’re going to have to leave.’

‘Sir, you’re going to have to leave.’ Now, they start moving towards us. So we left.”

Anzaldo’s full interview aired as part of the debut episode of “Documenting Chyna” on The Wrestling Inc. Daily.