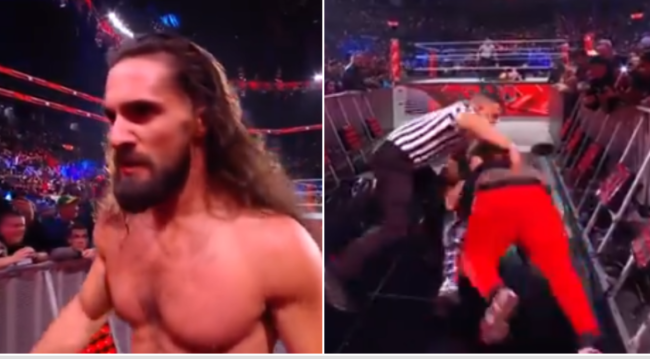 It appears that we know why a fan decided to attack WWE superstar Seth Rollins on Monday night.

During the latest episode of WWE’s Monday Night Raw, Rollins was tackled by a fan while heading towards the locker room.

Barely pay much attention to Raw these days but tonight I turn it on and the first thing I see is Seth Rollins being tackled by somebody who immediately disappears and it is never explained who he was or why he was tackling Seth Rollins pic.twitter.com/RKTPlBaI66

According to ESPN, the 24-year-old man who attacked Rollins was arrested and charged with attempted assault and attempted violation of arts and cultural affairs (disrupting a live sporting event).

ICYMI: A man was arrested Monday night in Brooklyn after an on-air attack on WWE wrestler Seth Rollins at Barclays Center https://t.co/7Rugs6tUEi

On Tuesday, the man in question took to Instagram and claimed that the wrestler had scammed him out of money. Unfortunately, it appears that he was duped by a fake Seth Rollins account without realizing it.

Here are the text messages/DMs of the man’s interaction with a person he believed was Rollins.

the guy attacked seth because he was messaging a definite fake account and believed it and the “business deal” went the wrong way pic.twitter.com/m397OboTQ6

This kids been planning this since 2019 because he messaged a fake Seth Rollins account and he just seemed to eventually stop replying https://t.co/xfp317zRRU pic.twitter.com/1ZL25vHsCl

The fake Seth seemed to have scammed this dude out of hundreds of dollars and then got the guys “bae” arrested because of a fake check. This is sad all around https://t.co/LuAnAQgLyp pic.twitter.com/on4V5QaQvL