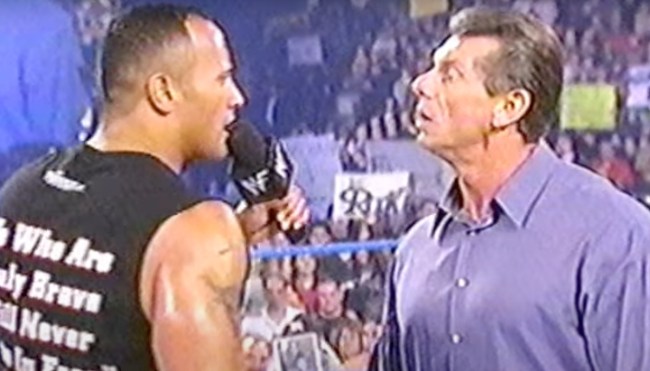 There’s no single person who’s had a bigger impact on the professional wrestling industry than Vince McMahon, who managed to turn what was once known as the “World Wrestling Federation” into a global enterprise after learning the ropes from his father.

Mr. McMahon has been calling the shots at was is now the WWE for more than four decades, and during that time, the promotion has spawned some absolutely absurd storylines and laughably over-the-top moments (many of which have featured the chairman at the center).

Of course, there are plenty of other ideas that ultimately never leave the writers’ room—including one angle McMahon dreamed up over 20 years ago that had the potential to be one of the most bizarre spectacles in the company’s history if it had come to fruition.

According to Wrestling Inc., WWE executive Bruce Prichard recently used the Something to Wrestle podcast to reflect on what went down when the company was gearing up to join the New York Stock Exchange shortly after the turn of the millennium.

Being the showman that he is, McMahon wanted to figure out a way to drum up some excitement and decided there was no better way to do so than placing a ring in the middle of Wall Street and putting on some matches after the opening bell rang.

However, he wasn’t satisfied with stopping there, as he envisioned a showdown he dubbed “The Brahma Bull vs. The Bear” that would feature The Rock in one corner opposite…a real, actual bear.

Here’s what Prichard had to say about what went down:

“Vince wanted to put a ring in the middle of Wall Street. Shut Wall Street down and put a ring there and have matches at noon. Huge spectacle, we’re gonna go live on WWF.com, so it’s like, okay, cool.

I thought he was just kind of telling me this. So I knew that ‘Okay we need to put on a show, we need to come up with something. But what he was telling me was ‘Hey, I want to do this, get it done.’

As he trails off he goes ‘and I want a bear…! I want The Rock to wrestle a bear.’ The Brahma Bull versus the bear. The honest to God living wrestling bear, which used to be an attraction back in the day.

The idea was eventually abandoned thanks to the optics that come with bringing a bear to the stock exchange (along with the inevitable backlash from animal rights activists stemming from the stunt), but it remains a pretty fascinating ‘What If?”