Fight Club, Protestors, A Poisoning And A Few Other Insane Moments From ‘WWE Raw’ Last Night 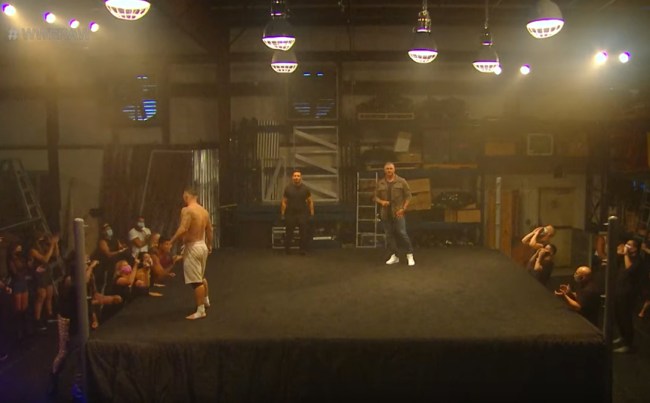 Wrestling news outlets hyped Shane McMahon’s return all day yesterday and played up the “chaos” going on at the Performance Center in the hours leading up to “WWE Raw.”

McMahon was announced to be on “Raw” but for an unknown reason.

Just before the second hour of the show, fans found out the reason for Shane-O-Mac’s presence at the Performance Center.

A ring with no ropes, in the basement of the Performance Center, featuring performers who haven’t quite yet made the main roster.

My immediate reaction was to hate Raw Underground because this is a wrestling show. The old man inside slowly creeping up to the surface wants to angrily tweet “If I want MMA, I’ll watch MMA!”

I don’t watch a football game hoping a rugby match breaks out on the sideline.

The Raw Underground action kicks off, lasts a few minutes, and the show goes back to the “Raw” commentary team where Tom Philips says, and I quote, “we’re gonna have to keep an eye on that.”

This lukewarm reaction from the commentary team is something that drives me nuts about “WWE Raw” and many of the WWE programs.

The commentary team hyped up Shane for the first hour-plus of the show. Cameras kept tabs on a massive figure standing guard outside Shane’s dressing room.

Shane finally shows his face, announces the Raw Underground concept, and the commentary team says NOTHING about it except like “oh, yeah, look at that, Shane has an underground fighting competition.”

If your boss shows up to work today and announces, “There’s a fucking fight club in the basement starting TODAY!” wouldn’t you be like “holy shit what’s going on?!?!”

The WWE tries to pack in so many stories into three hours of show that the A storylines often get ignored unless something is happening at the moment.

The moment the show moves onto another segment, the commentators forget all about the next-level insane occurrence moments before.

Anyway, wrestling fans online were quick to shit on the idea, calling Raw Underground the second coming of Brawl For All.

The two ideas couldn’t be more opposite. Brawl For All including established WWE performers in street clothes knocking concussions into one another.

The Raw Underground performers are relative unknowns – except for the guy from “The Main Event” movie – and aren’t wearing gloves and each altercation is scripted.

I don’t fault the WWE for trying something new and I didn’t hate the presentation or the idea. Introducing new performers and storylines was necessary since top superstars come and go without warning because of Covid-19.

My only true complaint about Raw Underground is there really wasn’t enough to make a decision either way but I’m leaning towards giving it a chance so long as WWE never, ever tries to pass this off as actual shoot fighting.

I guess the WWE didn't learn their lesson the last time they went underground to find fighters. #wweraw #RawUnderground pic.twitter.com/PzxzZkomHq

The biggest takeaway from the night is the WWE is trying new things, including debuting a new faction that was wreaking havoc around the building all day long, even though that faction’s actions looked incredibly similar to what’s going on in Portland right now.

Ryan Satin, who runs Pro Wrestling Sheet, published an article earlier in the day claiming that the “WWE was planning to debut a new faction on the show tonight looking to cause ‘chaos’ on the show” in an effort to “change the way the organization operates.”

Satin later stated the faction isn’t meant to be political at all.

The faction blew up transformers, pushed over boxes backstage, and might have poisoned Montez Ford from the Street Profits.

I will admit that for the first time, in a long time, I watched all three hours of WWE Raw and left the show with more questions than complaints, and will tune in next week to see how everything shakes out.