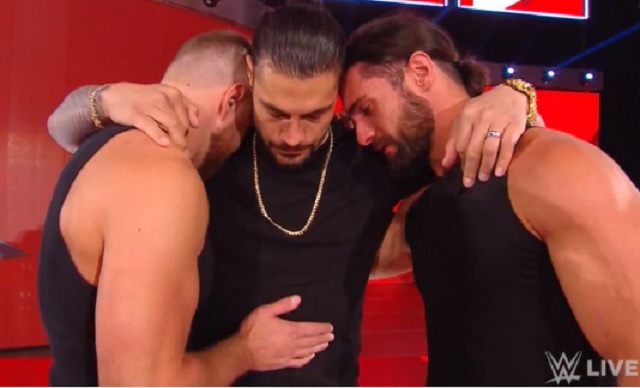 Roman Reigns opened this week’s episode of Monday Night Raw to announce that he’s forced to relinquish the Universal title because his Leukemia has returned.

Tonight on Monday Night Raw, Roman Reigns (aka Joe Anoa’i) announced that he is relinquishing the WWE Universal Championship and taking a leave of absence from WWE as he once again fights leukemia, which had been in remission since late 2008.

My real name is Joe and I’ve been living with Leukemia for 11 years and unfortunately it’s back, and because the leukemia is back, I cannot fulfill my role. I can’t be that fighting champion and I’m going to have to relinquish the Univeral championship.

I’m not going to lie, I’m going to need every prayer you can send my way but I’m not looking for sympathy, I’m not looking for you to feel bad for me because I have faith. When I was 22 years old I was diagnosed with this and very quickly I was able to put it in remission but I’m not going to lie that was the hardest time of my life, I didn’t have a job. I didn’t have any money, I didn’t have a home and I had a bady on the way and football was done with me.But you want to know who gave me a chance, the team who gave me a chance was the WWE. “I will beat this, I will be back, and you will see me very, very soon

.@WWERomanReigns has officially relinquished the Universal Championship on #RAW. pic.twitter.com/Dov281qW94

Roman Reigns just bared his soul on his fight with leukemia to the world. The fact he has endured this struggle privately for so long on top of putting out stellar matches and work. Warrior. Think we can now say we are all cheering Roman. #WWE #ThankYouRoman

Wrestlers and fans took to Twitter to thank Reigns and to wish him well.

I'm overseas and I just heard the terrible news about @WWERomanReigns and his battle with Leukemia. Totally shocked. Uce, you are a tough bastard and a true fighter, and you will beat this.
Lots of love.

♥️ THANKYOU, @WWERomanReigns. Praying for you and your family.

@WWERomanReigns My Family And I Are Thinking Of You And Are Keeping You In Our Prayers! We Are Here For You! 🙏🏻🙏🏻🙏🏻

Roman Reigns having Leukemia just put a dark cloud over the next 3 hours.

This isn’t about the character and his booking, it’s about a man’s actual life.

Very emotional start to #Raw with Roman Reigns announcing he has leukemia and needs to obviously step away from wrestling. He gave a great speech, the fans chanted his name and supported him. He gave up the Universal Title. Then he got a hug from his Shield brothers. God bless. pic.twitter.com/5rCwBqrVCJ

I don’t care if he needs my prayers or thoughts or not, because my prayers and thoughts are certainly with Roman Reigns right now. What an opener, man. We’re sending our love!

Roman Reigns is 33 years old, and now has to deal with leukemia for a second time.

That was heartbreaking to watch.

I wish him well in his fight. Fuck cancer.

Wow…just Wow. Blown away by what i just saw with Roman Reigns. Dont care to read any bullshit by podcasters or haters. This is real life not wrestling character nonsense. Now you see what is really important. Thank you Roman. God bless and get well soon.

I don't care what you think about the man and his character in the ring. But he's a stronger man than anyone of us.