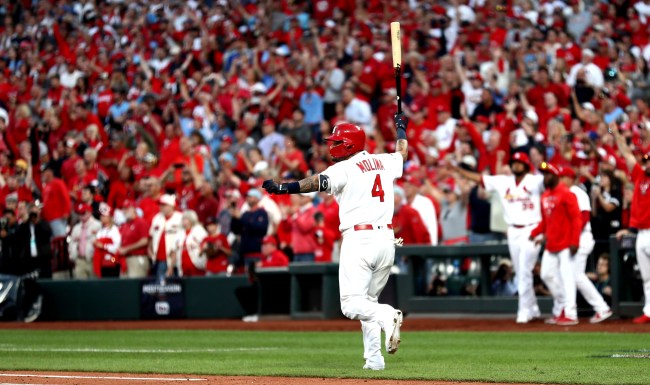 In case you missed it, and it is baseball-related so it’s certainly possible, Cardinals catcher Yadier Molina hit a walk-off sacrifice fly in the 10th inning to give St. Louis a 5-4 win over the Atlanta Braves in Monday’s Game 4 of the National League Division Series.

Molina also drove in the game’s tying run in the 8th inning, and now has 33 RBI in the postseason, putting him into a tie for sixth on the list of active players.

None of that, however, is what baseball purists are talking about on Tuesday. What they want to discuss with anyone who will listen (mostly other baseball purists) is the fact that after hitting his game-winner, Molina flipped his bat into the record books, launching it into the outfield, then gave the throat slash sign as he celebrated on the field.

Dammit, Yadi… don’t you know both of those things are a direct violation of the unwritten rules of baseball?!

“This is exactly what Yadier Molina lives for, this is what he trains for,” Cardinals manager Mike Shildt said at the post-game press conference. “Yadier Molina is about winning and winning championships, period.”

“This guy’s a Hall of Famer,” said Braves manager Brian Snitker after the game. “And he hits to the situation, stays within himself, doesn’t try to do too much. Take all the clichés, everything, that’s him. I mean, he’s a ballplayer. He plays the game, he plays the game in front of him probably about as good as anybody in the game.”

But… but… the bat flip and the throat slash! What about the feelings of the baseball purists? Don’t they matter anymore? People are seriously butthurt, you guys.

Think that’s an automatic ejection. Don’t like seeing this. Last thing we need is to see our little leaguer following this idea.

You know, that's really disrespectful. They should play the game the right way.

Now show his throat slash taunt for which he should be suspended the rest of the playoffs for pic.twitter.com/ECI3tNlXjf

What about the throat slash he did at the end towards acuna??? Is that respecting the game? Too full of himself. He is a solid player and a HOF. Don’t tarnish yourself.

Molina is a thug.