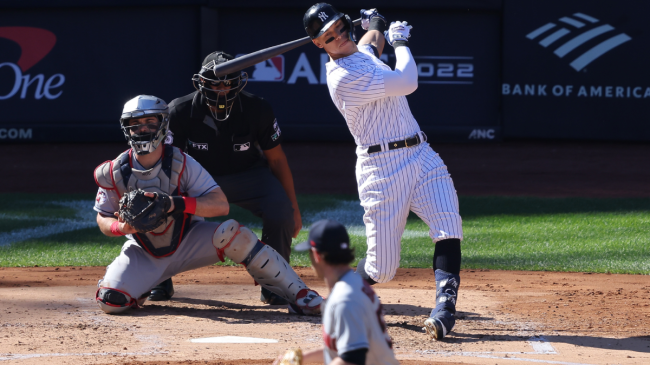 Aaron Judge has struggled mightily this postseason, failing to record a hit in two games versus the Guardians. The slugger knocked a team-record 62 home runs during the regular season, but the playoffs have not treated him well.

Judge is 0-7 with seven strikeouts and a walk. He K’d three times in the series opener, and he’s followed it up with four strikeouts in Game 2.

It’s not the first time the All-Star as struggled in the postseason. He’s a career .225 hitter in October. Against Cleveland, that number drops to just .056. He’s 2-for-36 against the franchise in the playoffs, striking out in 27 of 43 plate appearances.

Seeing their superstar slump when it matters most has fans frustrated.

In fact, a number of boos were heard coming from the bleachers in Yankee Stadium after Aaron Judge struck out for a fourth time on Friday.

Following his 4th strikeout of the day, 7th in the ALDS, Yankee fans boo Aaron Judge 😬

Despite everything the MLB’s home run king did this season, it’s apparently not enough for fans in the Bronx. Which is ludicrous.

Judge nearly won the American League’s triple crown, finishing first in homers and runs batted in, and second in average. He’s one of two players being considered for the MVP award.

That didn’t matter to folks in the seats, and they let it be known. Many on social media blasted them for doing so.

MLB personality Ben Verlander commented, “Aaron Judge is 0-4 with 4 Ks. Some boos heard at Yankee Stadium as he walked back to the dugout. Seriously? Boos? To him? Come on,” after hearing the crowd.

Some boos heard at Yankee Stadium as he walked back to the dugout.

Seriously? Boos? To him? Come on

One viewer wrote, “If you are a Yankee fan and just booed Aaron Judge, then you aren’t a Yankee fan.”

This person replied, “Did they really just boo Judge? We live in a cruel world,” in response to the Judge hate.

Did they really just boo Judge?

We live in a cruel world

The Yankees currently find themselves in a 2-2 tie heading to the bottom of the ninth. Maybe Judge can be the hero and shut his haters up.