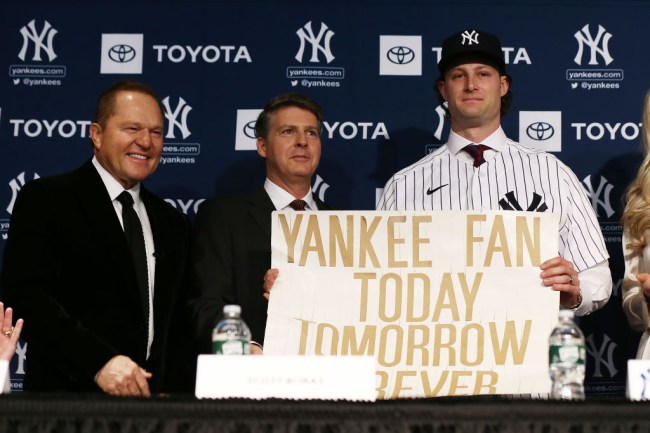 The New York Yankees had two secret weapons to help the franchise sign the most coveted MLB free agent in 2019. One was a 30-pound contraption, and the other was wine. It also didn’t hurt that the Yankees offered him a historic 9-year, $324 million contract. That probably helped too.

There were rumors that Cole would sign with one of the teams on the West Coast because he is from Southern California. The Yankees were not about to lose out on Gerrit Cole again (Yankees originally drafted him in the first round of the 2008 Major League Baseball draft, but he decided to go back to school and Yankees had a trade in place to acquire the franchise pitcher from the Pittsburgh Pirates). The Yankees came prepared to play hardball to sign their frontline starter.

First, the Yankees presented Cole with a “30-pound-ish contraption” that is shaped like a home plate with the signature interlocking Yankees’ “NY.” Once the object is opened, it reveals a model of Yankee Stadium.

There is an iPad in the middle of the field that answers every question a free agent may have about the historic franchise, including breakdowns of all 27 world championships to the best place to live and which school your child should enroll.

The next secret weapon in signing Cole was wine, but not just any wine, an extremely expensive wine that held a special place in Gerrit’s heart. The Yankees brass presented Cole with two bottles of Masseto Merlot wine from Italy. But how did the Yankees know that this exact kind of wine was Gerrit’s favorite? It was the unexpected yet brilliant work of Yankees clubhouse manager Lou Cucuzza.

When Cole visited Yankee Stadium as a member of the Pirates and the Houston Astros, he would talk to Cucuzza often.

“I’m really good friends with Lou. He’s just about as classy as it gets. There are some visiting clubhouse guys that are really close to my heart, and Lou is one of them,” Cole said. “You walk into a foreign atmosphere, and you need someone to take care of you, and that’s what those guys do.”

They both had an interest in cooking. On one occasion, Cole told the clubhouse manager about his trip to Italy and how he had this amazing wine while dining with his wife Amy Crawford in Florence.

“I always come into Lou’s office when I got nothing to do, and I kick my feet up on the table, and we just talk about stuff,” Cole explained. “We were talking about my trip to Italy with my wife the other year, and he always likes to know what I’m cooking because I like to cook at my house.”

“I showed him pictures of a meal that we ate in a cellar in Florence, and there’s a picture of a bottle of Masseto,” he continued. “He asked me what the bottle was and I said, ‘It’s Masseto, it’s probably acknowledged as the second-best red wine in the world.'”

Cucuzza made a mental note of the wine, and then once he found out that the Yankees were interested in Gerrit, he leaked this intel to the front office. When Yankees manager Aaron Boone met with Cole, he was armed with two bottles of the expensive wine from Italy.

“Aaron brought a couple bottles of it, and one of the vintages they brought was one of the exact same vintage from the anniversary dinner that my wife and I had in Florence,” Cole revealed. “I was a little bit back on my heels. I remember trying to stay focused on the meeting and not thinking about booze the entire time, but I still couldn’t figure it out.

“When I came home, I was telling (my wife) Amy, ‘How the f*ck did they pull that off?’ Not many people in the world know that that’s my favorite wine. I laid my head down at like 11:30 at night and didn’t sleep much that day,” Gerrit said. “I flew back up, and I was like, ‘LOU!’ I remembered the conversation, and I guess it went from Lou to (Brian Cashman) to Boone.”

If you’re looking to enjoy a bottle of 2004 and 2005 vintage of Masseto and you’re not being recruited by the New York Yankees, expect to spend about $900 for that vino.