A Runner Broke The Indoor Mile World Record By With An Unbelievable Time Of 3:47.01 (Video) 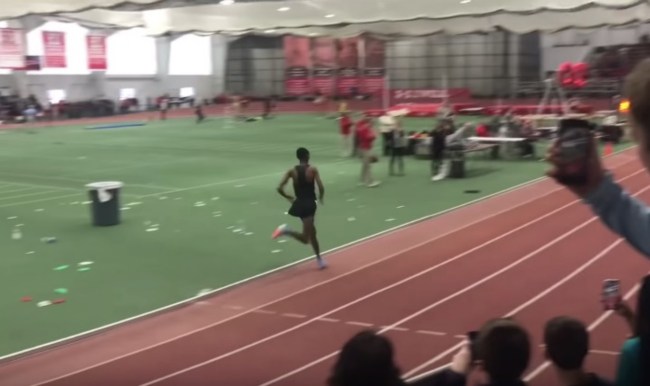 The Indoor Running world doesn’t get a ton of coverage compared to other sports. It’s one of those events that most people, myself included, tend to only pay attention to during the Summer Olympics and when world records are broken and my dudes we’ve got a world record on our hands.

Normally, I’d never sit here and watch a sub-4 minutes video of someone running circles around a track but this happens so damn fast I’ve watched the video like five times this morning because I honestly cannot process that he just ran a mile in the time it takes me to check the mail.

Not to be lost in this race was American runner Jonny Gregorek running a sub 3:50 mile which is the second fastest all-time amongst American distance runners. Also, the new Indoor Mile World Record has already slit into the SportsCenter ‘Top 10’ which has to feel amazing for a guy whose sport rarely gets any mainstream coverage at all.

It takes me at least four minutes to pretty much do anything in life. I just made coffee and that probably took five minutes. Brushed my teeth and flossed which felt like it took 10 minutes. Heck, I went to a wedding last night and it probably took me 30 minutes just to get dressed.

Yomif Kejelcha has won gold medals in the 3,000 and 5,000 meter races across the world and at this weekend’s race (at Boston University) he came up just short of setting the world record in the 1500-meter race as well. So remember his name for the next Summer Olympics because he’s only 21-years-old and will definitely be competing for a handful of Gold Medals for his native Ethiopia.