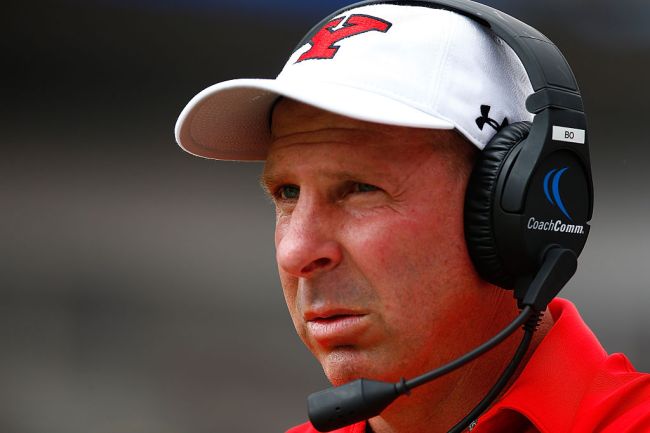 Bo Pelini was committing NCAA recruiting infractions left and right at Youngstown State and still only won 33 of 61 games from 2015 to 2019. Brutal. He left the program in January 2020, but the school was punished on Tuesday for violations that were committed while he was the head coach in Ohio. Even more brutal.

The collegiate sports governing body charged YSU with a “failure to monitor and ensure compliance with NCAA recruiting legislation” and laid down the following sanctions:

These punishments come after “an assistant coach had impermissible contacts with a prospect” and the program “permitted three football staff members to recruit off-campus without completing the coaches certification test.” Notice that of the eight penalties, not a single one applies to Pelini— who was at the helm. All of this was going on in behind-the-scenes and the school still went just 33-28 (with one appearance in the FCS Championship) during his tenure. Nothing to show for the fruits of Pelini’s illegal labor.

As outlined by Tuesday’s release, the NCAA, the university and the unnamed football assistance coach agreed that the coach had more than three dozen impermissible contacts with a prospect who was enrolled at a Division II university without obtaining written permission from the prospect’s school. The violations were furthered when that prospect made unofficial and official visits to YSU.

Per the release, it was found that the aforementioned assistant and other coaches were mistakenly informed by Pelini that the prospect was in the NCAA Transfer Portal. He was not and no one checked to make sure that he was. Part of that may have been because, as stated in the release, the assistant coach was not trained regarding portal management and did not have access to the portal. Seems like a pretty big oversight.

In addition, when Pelini left the Penguins for the defensive coordinator position at LSU last offseason, Youngstown State discovered that he and two of his assistants had not taken the 2019-20 coaches certification test that is required for off-campus recruiting activities. By nature of not taking the test, it was deemed that Pelini and company had impermissible contacts with 16 prospects and conducted impermissible evaluations of two others.

To eliminate any benefit of the doubt, Pelini and the assistants had received notice about their status regarding the test. The coaches who had not passed the required certification deliberately chose not to adhere to reminders from the NCAA. That’s what ultimately led to such severe punishment for the school— but not for Pelini.

The bottom line here is to say this: another school is being made an example for something that is rampant in college football while the man who oversaw it all is let off without any ramifications. Ridiculous.

Yes, what Youngstown State did was against NCAA regulations, but the kids who are now removed from the Pelini era are the ones who are being punished the most for something that they had no control over. The potential prospects who want to contend for an FCS National Championship with the Penguins are being punished for something that the school did before their recruitment process even began. Pelini didn’t receive so much as a fine.

It may not matter in the end because Pelini is an awful coach. He was fired after just one year as the defensive coordinator for LSU, but he made a boatload of money with his buyout and a fine (though negligible to Pelini) would at least show some consistency. Nope, nothing.

When it’s all said and done, the NCAA is going to NCAA.