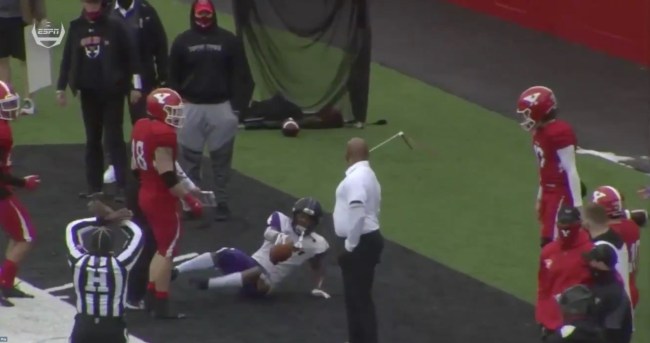 This story has flown completely under the radar. Youngstown State football’s director of player personnel is not allowed on the sideline for the remainder of the 2021 FCS spring season after he decked an opponent on the sideline over the weekend. On the play in question, Norther Iowa receiver Quan Hampton takes the ball to the edge for a nice game before running out of bounds to avoid taking a hit. The business decision didn’t pay off. YSU’s Tim Johnson could have stepped out of the pass-catcher’s way, but he chose to step up, lower his shoulder and lay Hampton out instead.

Quan with a big gain and gets out of bounds. #UNIFight pic.twitter.com/q27G7U9cQO

Somehow, there was no flag thrown on the play, despite a referee standing right there with a perfect view of the incident. While Johnson wasn’t penalized in-game, the school released a statement this week and announced his suspension from the sidelines.

YSU Director of Player Personnel Tim Johnson will not be permitted on the sidelines for the remainder of the spring football season, Youngstown State and the Missouri Valley Football Conference announced on Monday.

Tim Johnson Statement: “I apologize to UNI, Youngstown State, the Missouri Valley Football Conference and our community for what occurred on Saturday. As a member of the YSU Football staff, my actions are held in high regard and that should have never occurred. Again, I deeply apologize to all who have been impacted by my actions.”

A former All-American for the Penguins, Johnson is in his first season as a member of the Youngstown State football staff.

Johnson played linebacker for Youngstown from 1997-2001 and earned multiple honors during his time. He went on to play nine years of professional football across the NFL, CFL and NFL Europe before retiring from the game in 2009. The 43-year-old is known best for blocking a punt in Super Bowl XXXVII that was returned for a touchdown and his impression of Shannon Sharpe on Hard Knocks in 2001.

Perhaps the craziest part of the whole saga is that Johnson is in his first year on the Penguins’ staff. After the fall season was cancelled, this was only the second game of Youngstown State’s season and Johnson decided to go full-send.