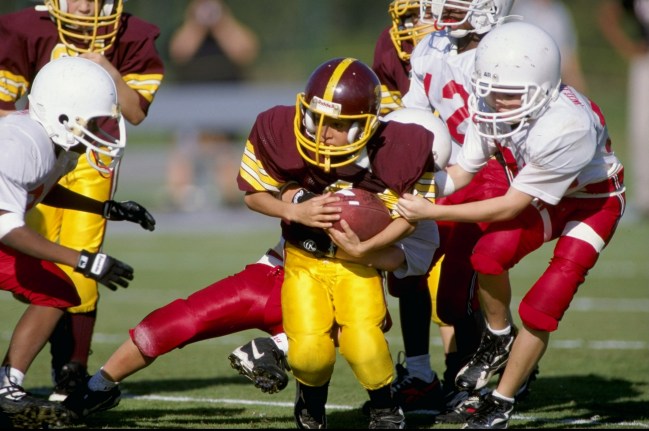 A Philadelphia youth football coach is facing a possible two-game suspension and hefty fine after his team blew out an opponent 36-0 which violated an extremely dumb league rule.

According to the coach he tried to prevent breaking a rule that prevents teams from winning games by more than 30 points by putting in his second stringers late in the game while up 30-0 but that didn’t stop his team from scoring one more time.

Kyle Williams told NBC10 he knew he was dangerously close to breaking the rules Saturday morning when his youth football team, the Conshohocken Golden Bears, went up 30 to 0. The rules of the Keystone Sports League, which features kids no older than 7 years of age, prevent a team from going up by more than 30 points.

“Less than two minutes left I called a timeout because I wanted to pull the starters off the field,” Williams said. “I put kids in there who normally never played.”

When one of the second stringers, a 5-year-old boy, got the ball he ran toward the end zone as Williams ran along the sideline and repeatedly yelled for him to fall down. The boy still scored however, putting the team up 36 to 0.

Now Williams is facing a possible $500 fine and a 2-game suspension.

“I have three sons,” Williams said. “I’m not gonna tell my son, especially if he’s running the ball, ‘Don’t go out there and give it your all.’”

Today’s story of “We are building weak children”

The youth football team in my wife’s hometown had a game today, they won 36-0. They don’t allow you to win by 31 without some type of punishment. The head coach is now suspended for 2 games and fined $500. ARE YOU KIDING ME?

@YouthKeystone is trippin!
1. Kids need to learn how to deal with failure. Don’t want to get smashed? Play better.
2. Life doesn’t let up. When it rains it pours.
3. The other kids can’t give their all because there is a rule. “Work hard but not too hard” that’s stupid.

4. It’s hard to find youth coaches as is but you consider fining a coach $500 an appropriate punishment?
5. If you truly want to have a slaughter rule simply stop the game. How do you coach or play knowing that you can’t score? That’s just stupid.