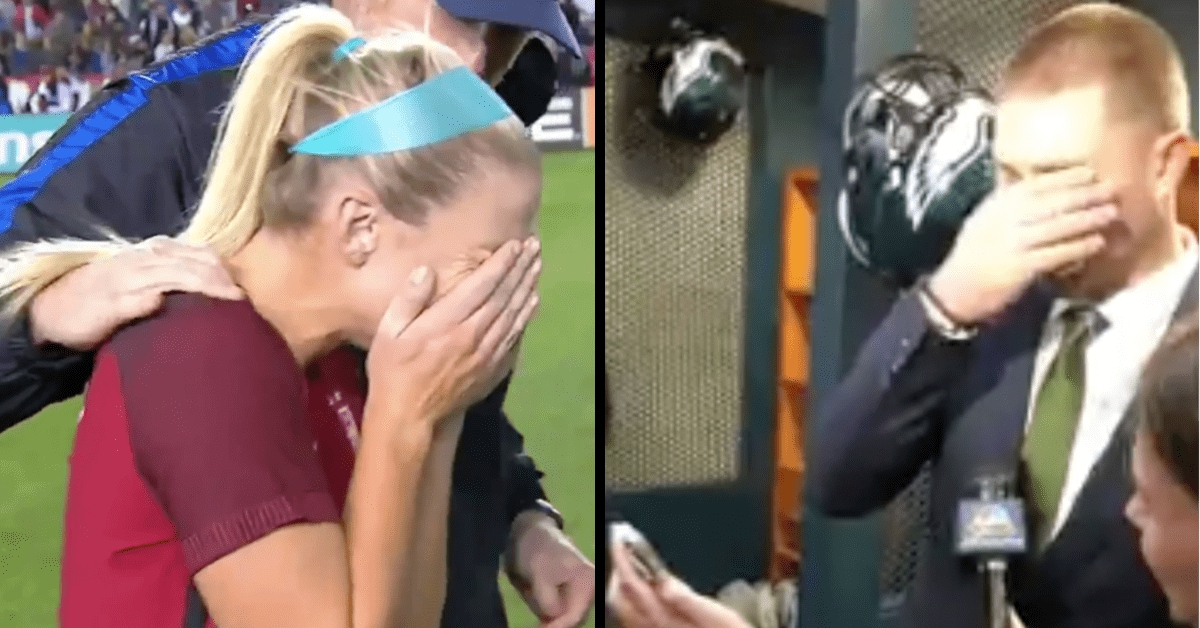 If anyone had a fair excuse to miss the Eagles NFC Championship, it was the wife of Tight End Zach Ertz, Julie Ertz. Julie was busy scoring a goal in the U.S. women’s soccer team’s 5-1 win in a friendly match against Denmark on Sunday night in San Diego.

Julie, the winner of U.S. Soccer’s 2017 Female Player of the Year award, refused to be told about her husband’s game until her match was over and everything was official. It was pretty clear she had it on her mind though…

As soon as the match was over, they let Julie know her husband is Super Bowl bound and she exploded with emotion in her celebration. She could barely believe it, asking “are they really going?” as she cried and celebrated with her teammates and friends on the field.

Check out her immediate reaction to being told the Eagles are going to the Super Bowl:

As soon as the whistle blew here in San Diego, we had some good news for @julieertz…💚🦅@ZERTZ_86 & the @Eagles are heading to the @SuperBowl! pic.twitter.com/dI5MvG53VR

In her post-game interview, Julie says she was tempted to check the score during halftime of her match but stayed strong. She noticed some people in their locker room smiling at her, knowing the Eagles were delivering a beatdown to the Vikings.

That moment when USWNT Julie Ertz found out her husband was going to the Super Bowl … pic.twitter.com/MFQ9Zb1u63

As this video started to sweep the internet, Eagles reporters had to ask Zach about it. See him watch her reaction for the first time and hold back tears as he attempts to stumble through his emotional response:

Zach Ertz overcome with emotion while watching a video of his wife @julieertz watching and reacting to the #Eagles game. pic.twitter.com/MBVhdP2ffA

All-in-all, a pretty damn great day for the Ertz family – Julie contributed a goal in her win and Zach posted nearly 100 yards off his 8-catch performance.

Of course, they had to celebrate together the best they could after their victories:

Thousands of miles away, but nothing keeps them apart ❤️ pic.twitter.com/JX895AhPcN