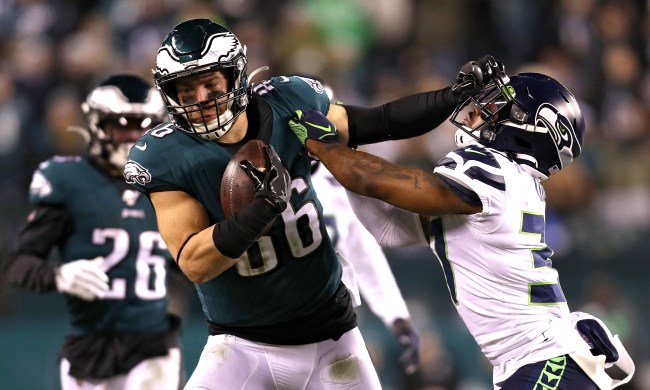 NFL players regularly participate in games while suffering from various injuries. That’s just their life. However, Philadelphia Eagles tight end Zach Ertz revealed after Sunday’s Wild Card loss to the Seattle Seahawks that he played the game with some injuries that would have left most people bedridden.

It was known that Ertz wasn’t 100 percent healthy entering the game as it was reported after Philly’s game versus the Cowboys in Week 15 that he suffered a cracked rib and a lacerated kidney that landed him in the hospital. That was the extent of what was reported, however – no real specifics.

Ertz was held out of the Eagles’ Week 16 tilt versus the Giants with those injuries, but on Sunday there he was, on the field, playing football against the Seahawks, catching two passes for 44 yards.

Turns out that the Eagles’ leading receiver was suffering even more than anyone outside of the Eagles’ locker room realized.

“There were two non-displaced rib fractures, a rib cartilage fracture, and obviously, the kidney injury,” a visibly emotional Ertz told the media after the game.

Ertz added that after the Cowboys game, he “went to the bathroom and there was some blood in the urine. The medical staff here rushed me to the hospital, where it was determined that I had a kidney injury” and couldn’t get out of bed on his own next day.

“I wanted to play for this city. I take a lot of pride in playing for my teammates,” Ertz added. “I knew if there was a chance and I didn’t play, I couldn’t look my teammates in the eye knowing that I could have played and helped them out.”

“It was tough. Monday after the Cowboys game I couldn’t get out of bed on my own, but I knew everything this team has put, gone through the past six months together when we started last April and like I said I knew if there was a chance I could play I always get the best cover guys and the defense always has to account for me and so I knew if I could be out there, even if I wasn’t a hundred percent that the defense gotta treat me like I’m a hundred percent,” he continued. “So I couldn’t look myself or my teammates in the eye knowing everything they’ve sacrificed over the months if I was able to go and didn’t go. So as long as everyone was good with it from a health standpoint I wasn’t going to miss the game.”

The fact that Ertz not only played in the game and was able to contribute, let alone still be upright, when it was all over is nothing short of remarkable… and more than a little inadvisable.