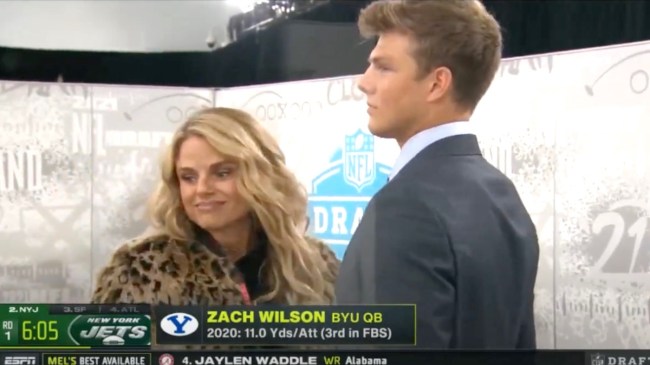 Michael and Lisa Wilson have six children— four boys and two girls. There are quite a few athletes in the family, but of the six, New York Jets rookie quarterback Zach Wilson is the most notable.

Although it is unclear what exactly the patriarch, Mike, does for a living, he does well. Like, very well. That was on display on Friday night.

Lisa, who is one of the best follows on Instagram, knows how to throw a party. She held a “sexy casual birthday party” for herself back in August and was back on her hosting grind for her son Isaac Wilson’s birthday.

Isaac, who plays quarterback for Corner Canyon High School just like his older brother, turned 16 on Friday. After winning his game, Isaac came home to a big surprise party with all of his friends.

The party was held in the basement of the Wilson’s house and it looks absolutely awesome. It’s the ultimate bar/game room/man cave/movie theater and also serves as a shrine to the athletes of the family.

In the far left corner, there is a giant theater room with a significant silver screen. Serving as a room divider, there is a countertop with bar seating that sits alongside a kitchenette, with a microwave and fridge.

As Lisa does, the snacks were on point for the party.

On the other side of the room, there is another full bar seating area that faces yet another large TV, as well as a living room seating section. Over in that corner, it is dedicated primarily to BYU.

There is a full-sized mannequin wearing a full uniform, all four of the Wilson family college football players’ jerseys, lots of trophies and a giant neon sign that reads “PROVE THEM WRONG.”

Between the theater room and the sitting area, there is a ping pong table, a shuffleboard table, a small section for Utah (Mike played for the Utes), and a big New York Jets sign.

The Wilson family basement is serious goals. Here is a look at the full remodel:

Whatever Mike does, it’s paying off, because there is not a single thing missing from his set-up.