Is Zach Wilson NYC’s New Most Eligible Bachelor? He And Long Time Girlfriend Erase Each Other From Instagram 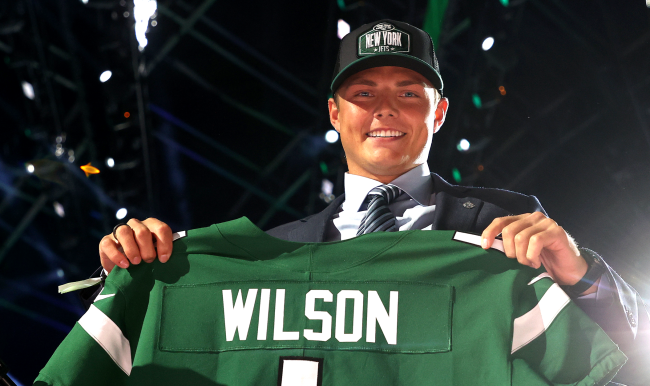 Zach Wilson is 22-years-old and the starting quarterback for the New York Jets. Which, even as horrible as the Jets are and have been, is still a pretty big fricking deal.

Toss in the fact that he’s already worth $35.15 million thanks to his fully guaranteed rookie contract and there might not be a more eligible bachelor in the tri-state area.

All of which is to say, that if, as it appears, Zach Wilson and his long time girlfriend Abbey Gile have broken up, there will be no shortage of potential suitors for the former BYU QB.

Wilson and Gile have been together since they were teenagers and she even joined him and his family at the 2021 NFL Draft in Cleveland where he was picked number two by the Jets.

“Still can’t wrap my head around this moment,” Gile said after Wilson has drafted by New York. “Feeling so blessed to have been a part of his journey since high school. Zach has worked so hard to be here and he made his dream reality.”

Throughout his freshman professional football season, Gile and Wilson regularly shared photos of one another, including one of them together on a date with Wilson’s teammates Nick Bawden and Quinnen Williams and their partners.

In October, Gile shared a picture of herself and Wilson outside MetLife Stadium following his first win as a pro.

Those photos along with every other picture featuring the two of them now no longer appear on their Instagram pages. They do still, however, follow one another.

The most recent photo on Gile’s Instagram account is from November 15 even though had previously had images of her and Wilson, wearing a #2 necklace, at the December 19 Jets-Dolphins game.

Wilson’s most recent Instagram is a look back at the 2021 Jets season with the caption, “Onward and Upward. Team effort. Locked in for next year.”