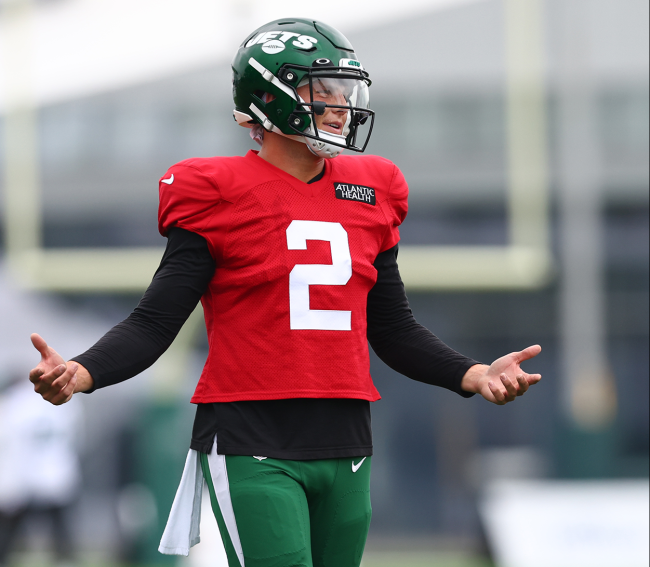 Zach Wilson was all of the buzz of the offseason and early portion of rookie camp, minicamp and training camp, but it wasn’t necessarily for his on-field play. Despite multiple reports that Wilson is bigger, stronger and throwing better, it was an off-field rumor about his relationship with his mom’s friend that grabbed headlines.

Now, as the focus turns back to the gridiron with the start of the regular season a month away, it’s about football. Wilson has been commanding attention with his gun-slinger ability and has reportedly been making great strides at the position.

Although the Jets are not Super Bowl bound just yet, there is a lot of hope that this season will mark the start of a significant turnaround. There is hope in New York for the first time in a long time and Wilson is a large part of that.

Gang Green held an open scrimmage at MetLife Stadium over the weekend and Wilson showed off his athleticism.

The 23-year-old, former No. 3 overall pick was dropping dimes into a bucket.

However, it was not his throwing that stole the show. Wilson’s catching ability was the viral moment that came from the open session.

At some point during the afternoon, Wilson was hanging out with the rest of the quarterback room when a ball was thrown his way. Instead of swatting it down or grabbing it with two hands, he stuck only his right paw into the air.

And then, rather than grabbing the entire ball with one hand, Wilson made the most casual one-handed fingertip grab right on the nose of the football. He could not have made it look easier or like less of a big deal. Take a look:

Here’s another angle from the crowd:

Caught it as I was panning the crowd. pic.twitter.com/LncPfUS2Co

Between Wilson having that dog in him, his improved throwing, decision-making and mobility, and his one-handed fingertip catches, his stock has never been higher. Don’t sleep on the Jets.