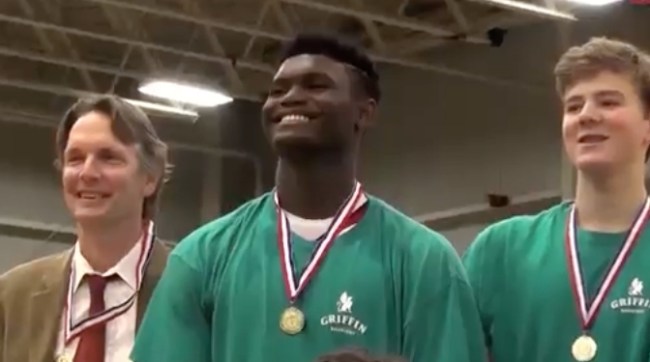 What were you doing at the tender age of 17? Me, I was scrolling through my AIM Buddy list trying to interact with a female in between trying to grab the rim on the basketball hoop in my driveway.

Zion Williamson, at 17 years old, has achieved a bit more success than my sorry ass. The 6’6” freak of nature has scored 3,000 career points for South Carolina’s Spartanburg Day School while picking up McDonald’s All-America honors and a written commitment to play ball at Duke. He also has 114,000 Twitter followers on his buddy list.

Here is a clip of Zion sending an opponent’s shot into outer space before 360 dunking before the first half buzzer sounded.

WATCH: @ZionW32 with an INSANE block and 360 walk-off dunk at the first half buzzer. Duke is getting a star! The crowd reactions are just as good as his plays. Spartanburg Day leads King's Academy 51-26 at the half of the 2A boys semis @WLTX #Duke #Zion pic.twitter.com/NSqnzTYuDn

This poor kid trying to score on Zion Williamson… pic.twitter.com/jUkv850nTR

Check out the 9 second mark of the below clip to watch Zion dunk the daylights out of the ball on some poor victims head.

17-year-old Zion Williamson is a force at both ends of the floor.

If I ever played this dude in high school, I would probably still be enrolled in therapy. Couldn’t withstand  that much physical and mental abuse in my formative years.