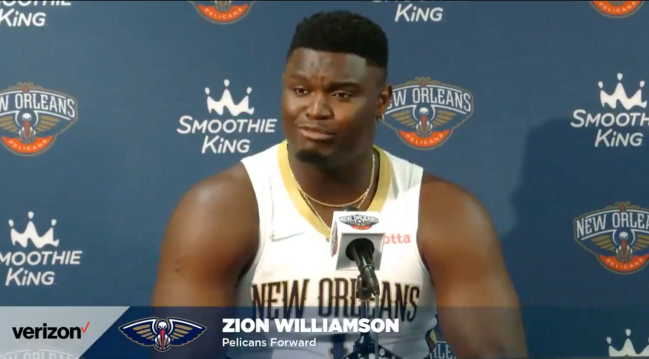 Zion Williamson wants to make one thing very clear— he would never let a grown man enter his hotel room and play him the piano. Never.

While his declaration might seem like it came out of nowhere, there is a backstory. It stems from a recent report regarding Williamson and David Griffin, the Pelicans’ Executive Vice President of Basketball of Basketball Operations.

Per the report from NOLA.com, the two did/do not get along.

During Williamson’s rookie season, he grew increasingly frustrated about how the team handled his return from a knee injury. While a lot of tension came between him and New Orleans’ medical staff, his relationship with Griffin also “began to sour.”

NOLA.com reported that Griffin had hopes of mending the line of communication between him and his young star and did so in unusual fashion.

“Although they communicate infrequently now, Griffin tried hard in Williamson’s rookie year to forge a bond. One example: During the Pelicans’ bubble stay, Griffin asked to meet with Williamson and played the piano for him.”

Williamson, who addressed the media on Monday morning, denied such an occurrence. He would never let a grown man enter his hotel room and play the piano.

We will never know whether Griffin did serenade Williamson by tickling the ivories, but he seems adamant that it’s false. For NOLA.com to report it as fact is pretty hilarious.

While the story might be fabricated, it makes for a really funny mental image. Imagine Williamson opening his hotel room door for Griffin to come in and have a chat, and instead, Griffin sets up his piano at the end of the bed and starts going to town on the keys.

The whole thing is pretty hard to believe, but we ultimately get to choose our truth, so… it happened.