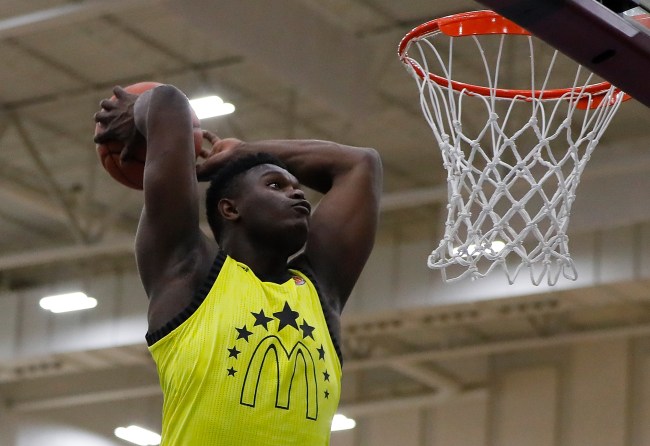 Zion Williamson has arrived, ladies and gentlemen. The superhuman athlete from South Carolina gained national notoriety in high school for his grown man frame (6’7”, 285 lbs.) coupled with his violent slam dunks and has now taken his one-of-a-kind skillset to the college level.

The 18-year-old McDonald’s All-American played his first exhibition game as a college player at Duke this week against Ryerson (Toronto, Canada). Williamson joined R.J. Barrett and Cam Reddish in the top recruiting class in the country at Duke, with the number 1, 2, 3, and 10, recruits. This resulted in the first time in NCAA history where the top 3 recruits all go to the same university.

Williamson showed out in the Ryerson game, scoring 29 points on 13-23 shooting (21 points in the first half alone) and snatching 13 rebounds. He also added some jaw-dropping plays. Check out Zion’s highlight reel from the game below.

Coach K said Williamson, who hovers around 6’7”, 285 lbs. set a Duke record for vertical testing, at 45 inches. Keep in mind, this dude already has 25 pounds on Karl Malone in his prime and has the athleticism of a Vince Carter. And he can do shit like this:

Goaltend or not, Zion Williamson can FLY.

Catch the second half of Ryerson vs. Duke exclusively on ESPN+. pic.twitter.com/i48rq4mNZs

Now I don’t want to crown this kid too early. Actually, yes I do. He’s going to be absolutely unstoppable in college and have an illustrious 12-year NBA career with Bronny James Jr. as his point guard. Book it.

After watching one half of the Zion Williamson Experience, I feel pretty confident in saying that he will be the greatest fat college basketball player of all-time.

Zion Williamson is a cheat code