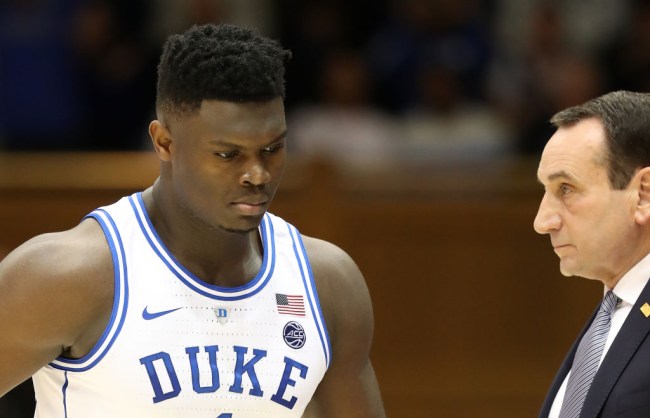 Zion Williamson’s former agent — Prime Sports Marketing’s Gina Ford — has served the New Orleans Pelicans star with legal requests to admit that he received “impermissible benefits” such as money and favors to attend Duke University and wear or use Nike or choose an Adidas-sponsored school.

According to legal documents that were made public by Wallach Legal founder Daniel Wallach, Williamson — now 19-years-old –allegedly received “gifts, money and/or other benefits” to attend Duke University

Additionally, the requests for admission also states that Williamson received impermissible benefits “to wear and/or use Nike and Adidas.”

Among the 11 bullet points from 5-15, the documents posted by Wallach shows a list of items alleging that he received “money, benefits, favors or others things of value” to sign with the Blue Devils for the 2018-19 college basketball season and wear or use the aforementioned brands. The served requests name Williamson and his mother and stepfather, Sharonda Sampson and Lee Anderson, and Ford is trying to make him say “yes or no” under oath regarding whether or not he accepted the impermissible benefits.

Williamson originally signed with Prime Sports after he left Duke, but filed a lawsuit to terminate the five-year contract June 13. [via 247Sports] 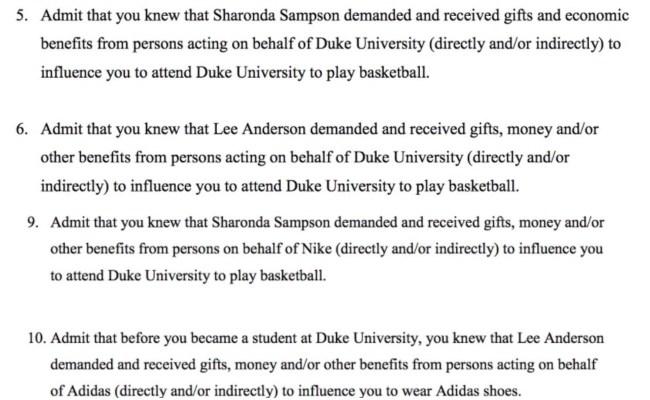 NEW: Zion Williamson’s former marketing agent has served requests for admission in their lawsuit asking him to admit that he received “money, benefits, favors or other things of value” to attend Duke University and to wear and/or use Nike and Adidas.

Williamson played one season for the Duke Blue Devils before being selected by the New Orleans Pelicans with the #1 overall pick in the 2019 NBA Draft.

After missing the first few months of the season, Williamson began his NBA career in January and has looked very much like a present and future superstar, as his rookie averages currently sit at 23.6 points, 6.8 rebounds, and 2.2 assists per game.

At the time of this writing, neither Duke University nor Williamson has released an official statement in regards to these accusations.